Dun Laoghaire saw a 100% increase of cyclists in the month of May compared to figures last year and the council responded by delivering a new four kilometre cycle lane from Sandycove to Blackrock. Video: Enda O'Dowd 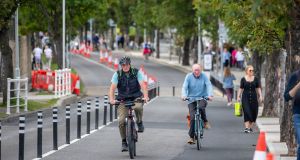 The segregated cycleway from Blackrock to Sandycove is due to be completed in about a week’s time. Photograph: Tom Honan

Robert Burns is barely a wet weekend as director of infrastructure with Dún Laoghaire-Rathdown County Council and already he is changing the face of the area.

In just a couple of months he has introduced a one-way system in Blackrock, created a new segregated cycleway from Blackrock to the Forty Foot via Dún Laoghaire and Sandycove, and dramatically reduced traffic levels that for years blighted the south Dublin coastline.

“We started this project at the end of June and we announced it two weeks beforehand. Six weeks, or seven weeks, ago it was only an idea,” he says of the sand-coloured cyclepaths that have replaced the southbound traffic lanes along the coast. “I’m director about four months so this is my first big project.”

The cycle lanes, which are due to be fully completed in about a week’s time, but are already heavily used, are central to the council’s Covid-19 mobility measures, Burns says.

“These measures are not only necessary for safety but for us to respond as a society.”

The coastal cycle route has an obvious attraction for holidaymakers and day trippers, but Burns emphasises it is a local route for local people.

“This isn’t a tourist project. This is for locals. What we’re doing here is to make like easier, make life safer, make life better for local people. Fine if other people want to come and visit and take advantage of it, but our primary aim is to look after the people who are in this area.”

The one-way system on Marine Parade, the coastal road in front of Sandycove beach, has particularly benefited the local community he says.

“Beforehand this was pretty much a route for day trippers. They would drive all the way to the Forty Foot and do a lap, and probably weren’t doing a whole lot here except trying to find parking, and taking up parking on the residents and probably blocking the road too.”

There is no doubt motorists are discommoded, but he says, they are not the priority now.

“The instruction and guidance that has come to us from Government is we are supposed to follow the user hierarchy to prioritise first the pedestrian, second the cyclist, third public transport and fourth the private motor vehicle.”

He points out that road deaths increased at a time when traffic was at 25-30 per cent of its normal levels.

While motorists may feel discommoded, Burns stresses the council has worked with local residents to ensure vehicular access has been maintained.

“Where people had concerns we would try and work with them. This is a new layout and we would be very sympathetic to them, we know it happened quickly. It is in our interest to work with people.”

Unlike the new Dublin city cycle paths, which rely heavily on wands and bollards to prevent motorists from encroaching on cyclists’ space, the Dún Laoghaire scheme largely uses low-level, though robust, wooden kerbing and a distinctive surface to create its separation.

“It needs to look good,” Burns says. “One of the key principles of cycleway design is it needs to look attractive. A lot of those flexible bollards and wands don’t look very good. We would be very mindful we have a lot of heritage villages – Blackrock, Dalkey, Dundrum, ” he says. “Just because something is temporary doesn’t mean it can’t look quite good.

With the specialist surface, bespoke wooden kerbing, planting and seating, the scheme has a definite permanent feel about it. However, Burns is adamant these measures are temporary, although what he can’t say is how long “temporary” is. “If somebody can tell me how long we will be living with Covid-19, I could give you that answer.”