Why science and technology matter 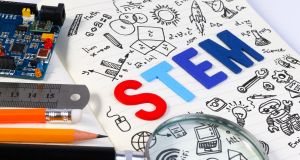 Science is pervasive. It’s what led to your existence, sustains your life and enables new technologies (including the smartphone you may be reading this article on). Put simply, modern society wouldn’t exist without it.

It’s no surprise that at least a cursory understanding of science and tech is needed in many roles that would not traditionally be associated with people working in labs and wearing white coats.

Roisin McGarr is the founder of ShowPresto. “I had been working in arts management for over 15 years when I became frustrated with the most chronic difficulties experienced by the arts and cultural sector: insufficient staffing and funding,” she says.

“From this, I have been developing ShowPresto, which aims to become an online event management tool so that staff can focus on the real work of the arts: creativity, imagination and community. I surveyed the sector and 82 per cent of respondents said that the demands of day-to-day programme administration held them back from doing more long-term planning, relationship planning and strategy formulation.

"The routine tasks which ShowPresto could automate currently cost each venue an annual average of €50,207 in staff time, excluding PRSI, to perform manually. If that money was used for marketing work instead of routine event admin it could generate €283,670 in ticket sales.”

McGarr has been awarded funding from Enterprise Ireland to help develop the idea, including an innovation voucher which has given her access to academic researchers. ShowPresto would help arts organisations run their festival or venue events, save time by automating tasks and workflows, save money by increasing efficiency and release staff hours to earn more revenue or do more programming, she says.

But there’s a challenge: in order to build this platform, she has had to become more familiar with technology and is now working directly with developers. “I never really thought that I’d need to understand science or tech in order to work in the arts, but it’s becoming clear that in order to set up or run any business, technology just can’t be ignored.”

This observation is key to the development of a new approach to science which, in Ireland, has been pioneered by Maynooth University: they are planning a new suite of courses which allow students to study arts and science subjects together.

It’s also the impetus behind Steam, a business-funded initiative where Stem workers or academics go out to primary schools to give talks and demonstrations about science. The talks run for one hour a week over 10 weeks and, as a bonus, serve to help the teachers learn more about science. But what does the “a” in their title stand for?

“It’s not just because scientists have to use their imagination and creativity,” says Colette Murphy, a professor of science education at Trinity College and one of the advisers behind the project.

“Scientists have always used those. We want to bring the area of science and arts together. People have tended to divide knowledge into different subjects in order to make them less complex, but the inclusion of the arts in the title is to bring a broader context to science. One of my academic colleagues, [professor of education] Marita Kerin, is a musician and has musicians as her students; now, they are working with some of the physics students on a project called “From Quavers to Quadratics”, which brings music and science together and helps the two disciplines learn from each other.”

Dr Alice D’Arcy, MD of Steam education, says that the motivation to have arts in the title is not just because there is an inherent value in the arts. “In almost every industry, people work together in teams; in areas such as drug manufacturing, design and business teams are as crucial as the engineers and technologists. It is important for the kids to know that, even if they’re not particularly brilliant at maths, doesn’t mean that they won’t be working with a mathematician at some point in their career. Creative and critical thinking are not mutually exclusive. The path to Stem isn’t always obvious.”

Panel: Orla Murphy on the meeting of arts and science

Orla Murphy has played music since the age of seven, taking part in the Cork Youth Orchestra, the National Youth Orchestra of Ireland and, in Glasgow University, with the Kelvin Ensemble.

Like many musicians, Murphy has gone on to build a career in science. She won the maths, physics and chemistry section of the 2006 BT Young Scientist competition. Later, she studied for a master’s degree in engineering in electronics with music at Glasgow because, she explains, she wanted to find a degree that was both technical and creative.

“Playing in orchestras involves a good mix of technical skill, determination and teamwork and I have taken a lot of these into my working life as an electronic engineer. I’ve worked in England with Jaguar Land Rover for over five years now. I started as an acoustic engineer, calibrating sound systems for the vehicles. Last month, I moved role within the company so I’m now working on broader engineering problems in the electrical quality team. I’m also training as a six sigma black belt problem solver: it’s good fun, it’s really interesting to overcome some big challenges in the business and I will come out with an MSc in engineering process excellence from the University of Bradford when I complete enough modules.

“I think the audio engineering work followed on from my degree in electronics with music, and I was excited to go to work in industry making a product – something I could work on which would go out to the world and be used and enjoyed by customers was a real bonus.”