HEA wants power to compel universities to co-operate with investigations 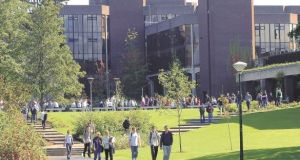 The University of Limerick campus. The Department of Education has announced details of a review into the governance, HR and financial practices at UL.

Public Accounts Committee chairman Seán Fleming says he is very concerned about revelations that the University of Limerick misled the Department of Education and the Comptroller and Auditor General during an inquiry into its payments of unauthorised and excessive severance packages to senior managers.

Mr Fleming told RTÉ’s Morning Ireland that the committee was misled by heads of four universities – UCC, DIT, UL and NUIG – about the way they run their financial affairs.

Over the last two months the heads of universities and other third-level institutions were before the PAC for a number of lengthy meetings.

He said a serious change of culture is needed at the most senior level and he welcomed the change of leadership at University of Limerick.

The university heads showed a lack of openness and candour, while the committee found the whistleblowers to be “honest and straightforward”, he said.

Mr Fleming added that there was “a systematic failure to keep financial accounts up to date” at these universities.

He also criticised the “lack of hands-on approach” by the department and the HEA in continuing funding to the colleges when a lack of up-to-date financial information was available.

The revelations were included in an RTÉ Investigates: Universities Unchallenged programme, broadcast on RTÉ One last night.

The programme examined the lack of oversight and accountability in publicly-funded universities and colleges in Ireland and revealed examples of poor corporate governance and the waste of taxpayers’ money.

Dr Love told RTE’s Morning Ireland that the HEA had been pressing the University of Limerick for two years to agree to an independent investigation.

At least a dozen protected disclosures or allegations are likely to form the basis of an independent review into allegations of misconduct at University of Limerick.

The Department of Education has outlined the terms of reference for the reviews which will focus on governance, human resources and financial practices at the college.

A total of six protected disclosures have been made by current and former staff of UL to the Higher Education Authority along as well as a litany of other allegations.

They include at least three former employees who say they had raised various concerns and were given severance packages worth more than €600,000.