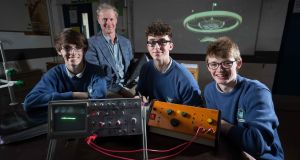 Four secondary school students from Ennis, Co Clare, have boldly gone where no Irish pupils have gone before and won an international Nasa competition for designing a major space settlement.

Students Seán Donnelly, Eoghan Keane, Jason Herbert and Kieran Maher received their award at a recent ceremony for their design of a self-sustaining settlement capable in space of supporting a community of at least 10,000 people.

The students were assisted by physics teacher John Conneely, along with biology teacher Michael Horgan and chemistry teacher Gráinne O’Brien.

“We were all thrilled with the news,” said Mr Conneely. “It’s a huge confidence booster for them. This is an international competition judged by top Nasa scientists, so to get their approval means an awful lot.

“It really was a team effort. The students developed the ideas themselves, and we gave some overall direction; they also got expert advice from the Colham Centre for Nuclear Fusion based in the UK.”

The St Flannan’s team adopted the radical approach of launching payloads into space without the need for chemical rockets.

Instead they based their launch system on an electromagnetic propulsion tube, similar in principle to that of magnetically levitating trains.

The team said it was inspired by science fiction writer Isaac Asimov to position their settlement in the asteroid belt, between Mars and Jupiter in orbit around the dwarf planet Ceres, which is thought to contain vast amounts of frozen water.

The students received their award at the International Space Development Convention in Puerto Rico earlier this month.