Harris says agility and flexibility of colleges are key strengths, and this required an appropriate level of autonomy 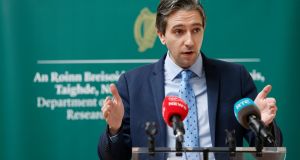 Minister for Higher Education Simon Harris: “Our society and the world of work are changing rapidly, and if anything this will be accelerated by the pandemic. Universities will have an important role in equipping us to manage this change.” Photograph: Crispin Rodwell

Stronger governance and accountability measures for third-level institutions will be contained in new legislation to be published next year, Minister for Higher Education Simon Harris has said.

Speaking at a conference organised by the Irish Universities Association (IUA), he said the agility and flexibility of colleges were key strengths, and this required an appropriate level of autonomy.

But, he added: “Hand in hand with such autonomy must go strong governance and accountability mechanisms at the institutional level.”

Gaps in legislation for the sector have limited the power of oversight bodies such as the Higher Education Authority (HEA) to investigate examples of misconduct in the past in a sector where up to €2 billion of public money is spent.

Among some of the sweeping changes being considered include giving the HEA stronger powers to carry out reviews into the performance of third-level colleges.

This includes allowing for the appointment of an “observer” to sit on the governing body of colleges where there are concerns. In addition, it could withhold or request a refund of State grants in cases where they have been misused.

Mr Harris also said it would be important to achieve “clarity and complementarity” of roles between the department and its agencies, particularly the HEA and Quality and Qualifications Ireland.

In a speech which examined the future direction of higher education, Mr Harris said universities of the future would place a much bigger emphasis on delivering short courses in flexible formats and tailored courses to meet the needs of enterprise and life-long learning.

“Our society and the world of work are changing rapidly, and if anything this will be accelerated by the pandemic. Universities will have an important role in equipping us to manage this change. This will entail agility and innovation in how universities operate,” he said.

“I see this in your recent work on micro-credentials and the delivery of certified qualifications in short courses in flexible formats.

“This is exactly the kind of initiative we need to increase Irish university capacity to extract and adapt high-demand modules from existing programmes, and develop tailored courses to suit the needs of enterprise and lifelong learning.”

He also paid tribute to Taoiseach Micheál Martin for establishing a new department including further, higher education and innovation, first aired in a speech at the IUA a year ago.

“I don’t wish to be accused of sucking up to the boss but I have to see my speech today as the sequel to his address to you just a little over a year ago,” he said.

“There are probably few truly visionary speeches but there are surely very few that became a reality so shortly after.

“That event developed the concept of creating a separate Department of Further and Higher Education, Research, Innovation and Science, and today I lead that department.”

Mr Harris said he saw his role as being a “Minister for talent” and using his department to unlock the potential of the Irish population.

“Ultimately we are just under five million people in a world of 7.8 billion. We represent just over 0.06 per cent of the world’s population.

“We shouldn’t kid ourselves that the world owes us a living. How we develop the talent of our people will determine if we can punch above our numbers, and prosper at home and internationally.”

Mr Harris said that developing “an appropriate funding model” to underpin the sector will be a pre-requisite.

“Detailed research is under way to inform the decisions required on this funding model next year.”