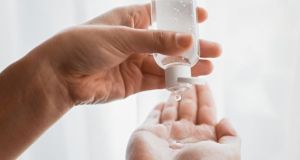 The Department of Agriculture should have issued a public notice about the problems with ViraPro hand sanitiser on October 16th when a formal notice was issued to the manufacturer to recall its product, Minister for Agriculture Charlie McConalogue said last night.

Schools were only alerted to the recall of the ViraPro-branded hand sanitiser late on Thursday night after a statement was issued by the Department of Education.

A number of schools said they were forced to close on Friday due to the short notice, while many others had to scramble to find alternative products.

This was because some of the hand sanitiser products, which was one of those on the procurement list for schools, was found to contain methanol rather than ethanol.

Inadequate levels of ethanol render the product ineffective and frequent use of sanitiser with methanol can cause nausea, dermatitis, eye irritation, upper respiratory tract irritation and headaches.

In response to the alert, the department had told schools they could close on Friday, or finish early, if such action was deemed appropriate.

Mr McConalogue told the Dáil he only learned of the difficulties on Thursday.

The department has acknowledged that it was first alerted to safety issues with hand sanitiser used in schools on Tuesday.

A statement was only issued on Thursday night after “it become evident that the recall of product had not commenced and his department issued the statement about the possible risks of the product”.

He said “the primary responsibility for withdrawal of products rests with the company concerned”.

He said there would be a full review of the handling of the issue to ensure the system is robust “and that lessons are learned”.

He said a potential problem was first raised on September 25th when Revenue notified the Department of Agriculture that the European Anti-Fraud Office had contacted them about the importation of a hand sanitiser from Turkey to Ireland from the same supplier of a product tested in Denmark and found to contain excessive levels of methanol.

The results of tests the department carried out were fully validated on October 16th.

Earlier on Friday, the Department of Education acknowledged that it was first alerted to safety issues with hand sanitiser used in schools on  Tuesday.

Opposition parties demanded answers over the delays in alerting schools and the wider public to safety risks linked to the hand sanitiser.

Labour Party education spokesman Aodhán Ó Ríordáin said an explanation was needed for the delay in withdrawing the product. He said the short notice provided to schools was “disgraceful and shambolic”.

“There is heightened anxiety amongst the school community now and we need clarity on why it took the Department two days to recall this product. Issuing a statement at 11pm at night effectively closing affected schools is not acceptable,” he said.

Sinn Féin’s agriculture spokesman Matt Carthy said the Minister needed to explain why the issue only came to light on Thursday night when a public recall had been in place since Tuesday.

He asked if the department provided approval for this product in the first place and if so, how.

The Cavan-Monaghan TD asked when Mr McConalogue and his department “first become aware of the concerns regarding this product? When was it decided to consider recalling?

“Why, when the decision to recall was formalised on Tuesday, was this decision not publicised until very late on Thursday night? At what point were the Tánaiste, the Taoiseach and the Minister for Health informed that yet another debacle was coming down the tracks?”

While some were forced to close, others ended up taking last-minute steps to ensure they had safe alternatives.

“Some principals were going into their schools at around midnight to check what supplies they had,” he said.

“Others were rushing to organise alternative supplies on Friday morning. Many of those schools affected had very little time to get ready.”

Suppliers of the product are on a list of 11 authorised to provide protective equipment to schools.

St Patrick’s Boys’ National School in Drumcondra and Gaelscoil Ros Eo in Rush, Co Dublin said they had to close due to their reliance on the product.

Anne Looney, chairperson of St Patrick’s Boys’ National School, said had they been informed earlier on Thursday instead of at 11pm on social media, they may have been able to keep the school open on Friday. “I’m sure there are some principals who didn’t see that [social media post] last night, who got up this morning and discovered that the hand sanitiser across their school was an unsuitable product,” she told RTÉ’s Claire Byrne show on Friday.

The school made the decision to close at about 11.45pm on Thursday and informed parents. Ms Looney and principal Natasha Bassett said they considered “various options” but that there was too much uncertainty and decided the school should close.

Tim Ó Tuachaigh, principal of Gaelscoil Ros Eo in Rush, Co Dublin,said he found out about the recall in an email on Thursday night and was frustrated to learn that the issue initially came to light on Tuesday.

Mr Ó Tuachaigh said some parents are “livid” and that it was “ridiculous” to find out so late on Thursday night.

He said his school uses anti-bacterial wipes and surface cleaner of the same brand that was quoted by the Department of Agriculture and that these too could be affected.

He said the school opens at 8.30am and they would have been “struggling” to get hand sanitiser removed and replaced throughout the building in time.

The Association of Secondary Teachers Ireland (ASTI) said the recall of sanitiser is a matter of major concern and unfortunate “given the significant additional burden on schools in recent months to implement a number of measures in order to reopen and stay open”.

“We hope that nobody has or will suffer adverse effects,” a spokeswoman for the ASTI said.

“We are aware of schools with the sanitiser and they are making alternative arrangements this morning. Some schools already have another sanitiser on site. Schools reliant on this sanitiser must be supported in addressing this issue as quickly as possible.”

In response to the alert, the Department of Education told schools they could close on Friday, or finish early, if such action was deemed appropriate.

“The Department of Education is informing all schools of the need to check whether they have used this supplier and have stocks of this product. Schools should follow the advice of the Department of Agriculture to cease using it,” it said.