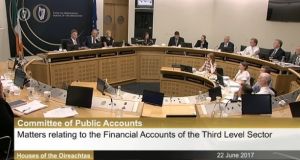 University officials have been accused of misleading an Oireachtas committee over the way they run their financial affairs.

Senior officials from colleges including University of Limerick, DIT and University College Cork appeared before the Dáil’s Public Accounts Committee on Thursday to answer allegations over unauthorised severance packages, conflicts of interest and poor corporate governance.

Officials at the university had previously told education authorities that severance packages to two staff – worth €231,000 and €220,000 – were paid as a result of employment relationships breaking down.

However, UL went on to re-employ both individuals as consultants for a further three years for a total of €180,000 and €189,000 respectively.

A senior university official told a sitting of the Public Accounts Committee last March that the college had broadly complied with good practice relating to these payments.

However, a report by the Comptroller and Auditor General had found the sums were significantly in excess of standard rates and had not followed best practice.

Sinn Féin TD Mary-Lou McDonald said she was alarmed at the college’s failure to provide complete answers over the way taxpayers’ money was being spent.

“The committee has been misled, deceived, whatever. The Department of Education, ditto. The Comptroller and Auditor General has been left with incomplete information. That’s quite something,” she said.

The committee also heard that just over €90,000 was spent by UL on engraved Cross pens, Bulova watches and silver medallions from a shop linked to a member of the university’s governing authority.

The payments, reported in an RTÉ Investigates programme last month, were issued by the university’s head of human resources, Tommy Foy, to Tadgh Kearney’s Jewellers on Thomas Street in Limerick city. Mr Kearney is a member of the university’s governing authority.

In response to questions from committee members, UL’s recently-appointed president, Prof Des Fitzgerald, said there were conflict of interest issues which will be examined when an internal audit and external investigation are completed.

When asked if any sanctions would follow for individuals, he said he would take the “appropriate steps” when full information is available following both investigations.

Prof Fitzgerald also apologised to the committee for incomplete information that has been provided over severance payments.

He said the record had been corrected and he pledged to deal comprehensively with all allegations of misconduct facing the university.

DIT was also also accused of misleading the committee in its explanations over losses of more than euro700,000 relating to an academic journal supplier which went bankrupt.

Catherine Murphy TD said she felt she had been “misled” by DIT president Prof Brian Norton at a meeting last April, in response to questions over the renewal of a contract for the journal supplier.

She said she had been provided with reassurances around the manner in which the contract had been renewed.

However, Deputy Murphy said a highly critical consultant’s report into the matter - which had not been passed on to the committee - subsequently revealed a series of management failures surrounding the contract renewal.

This report, completed in 2015, was finally made available to committee at the end of May after the DIT’s governing body directed its president to do so.

In response, Mr Norton expressed his regret that the Ernst & Young report had not been provided.

However, he said a management review had been send to the committee last year, outlining key findings and recommendations on foot of the report.

On the allegation of providing misleading information, Prof Norton said he had misunderstood Deputy Murphy’s question at a meeting last April and never meant to claim the systems in place at the time of the contract renewal were appropriate.

However, he said a series of steps have since been taken to ensure there are greater checks and balance over spending and procurement

Senior officials at UCC also insisted that they had not misled the committee over the college’s acquisiton of the Irish Management Institute.

The college has faced allegations that it withheld key details around the transaction from the committee at a sitting earlier this year.

However, university president Patrick O’Shea – who took over last February – said “no taxpayer or exchequer funds” of any kind were used by the university to acquire the IMI.

In documents provided to the committee, UCC said it paid €20 million for IMI’s Sandyford campus through borrowing and no public monies was involved.

The university also agreed to invest €2.5 million in the campus following the acquisition to refurbish and upgrade facilities.

“I wish to reassure you that UCC had not misled the committee regarding the acquisition,” Mr O’Shea said.

However, members of the committee said the university’s earlier claim to have paid “nothing” for the IMI did not stand up to scrutiny.

Mr Fleming said the college had tried to split hairs by previously claiming it acquired the IMI business for nothing, yet the campus had cost €20 million.

Mr Fleming expressed frustration that it had taken a second meeting to get a “better understanding” of the purchase.

Sinn Féin TD David Culinane also said the purchase was a more elaborate transaction aimed at allowing the IMI to pay off liabilities relating to pensions and bank loans.

An official from UCC said the college had been clear in documentation supplied to the committee that the IMI had used some of the €20 million it received to discharge these liabilities.

“The acquisition by UCC was fully disclosed to the Higher Education Authority in advance of the transaction close.”