‘Baptism barrier’ to be removed from primary schools next year 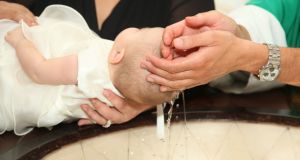 The order, to be signed by the Minister, will remove the existing provision permitting schools to use religion as a selection criteria in school admissions in most cases. Photograph: Getty

The “baptism barrier” for entry to all Catholic primary schools is to be removed for the coming academic year.

Minister for Education Richard Bruton is set to commence key provisions of the School Admissions Act on Wednesday which will prevent most schools from giving enrolment priority to baptised children for the 2019/2020 school year.

Minority faiths, such as the Church of Ireland, will be allowed to prioritise members of their religion in order to protect their ethos in cases where they are over-subscribed.

Mr Bruton said this exclusion had been introduced to help ensure children of minority faiths could still access a school of their own religion.

The new rules will apply to over-subscribed schools – about 20 per cent of primary schools – only on the basis that schools with spare capacity are obliged to accept all applicants, regardless of religion.

Mr Bruton has argued that Catholic children will still be able to access Catholic schools given that they make up the vast majority, 90 per cent, of all primary schools.

However, some schools who are mid-way through processing their admissions for the coming year say the short notice of the change is set to cause “chaos”.

Ultan Mac Mathúna, principal of Holy Cross primary school in Dundrum, Dublin, said: “We’ve been left in the dark as to the application of this rule. It will cause chaos. We can’t give parents a straight answer. Changes to admissions require a decision by the board, and need to be approved by the patron and published.”

A Department of Education spokeswoman said all schools would be required to change their admission policies and that the changes had been flagged for several months.

“The order which I am signing today will ensure greater fairness in school admissions,” he said.

“The Act will create greater confidence for parents that the admission criteria laid down by schools and the procedures used by them are visible, legitimate, reasonable and fair.”

The order, to be signed by the Minister, will amend equal status legislation. It will remove the existing provision permitting schools to use religion as a selection criteria in school admissions in most cases.

Other sections of the School Admissions Act due to come into effect from Wednesday include a ban on schools charging admission fees (with the exception of private schools).

This aims to cease the practice of schools seeking annual mandatory contributions from parents to provide for their continued enrolment. Schools, however, will be permitted to seek “voluntary contributions”.

The Minister will have new powers – from December onwards – to require schools to co-operate in relation to admissions. This is aimed at ensuring there is capacity locally so all children in an area have access to a school place.

The Minister will also have new powers to compel a school to open a special class. This seeks to tackle the use of “soft barriers” by some schools.

The new Act will also ban waiting lists for entry into school and provide for a 25 per cent limit on the number of school places that can be set aside for children of past pupils. At present there is no such restriction.

Mr Bruton said consultation was required in relation to these steps with education partners.