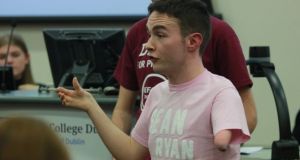 Sean Ryan, a candidate for president of Trinity College Dublin’s students’ union, who dropped out of the race following allegations of sexual harassment. Photograph: Trinity News

A candidate for president of Trinity College Dublin’s students’ union has dropped out of the race following allegations of sexual harassment.

Sean Ryan is alleged to have sent a woman a series of Facebook and Snapchat messages which include allegedly unsolicited requests for oral sex, naked photographs and requests for naked photos.

Trinity News reported that the woman concerned made a complaint against Mr Ryan to college authorities this week.

In a statement issued on Thursday evening, Mr Ryan announced he was resigning from the presidential race. The result of the ballot is set to be announced on Thursday night.

“I nevertheless want to apologise unreservedly for any offence caused by my remarks as published in student publications.

“I do now understand that certain language I used in the past was inappropriate, and has fallen short of what is expected of a TCDSU president and what I expect of myself. It was never my intention to cause hurt or offence to anyone.”

Mr Ryan in his statement said a “racial slur” quoted in the article was “totally and utterly reprehensible and not representative of my views of members of the black community. Again, I deeply and sincerely apologise to anyone who this comment hurt.”

He added: “I deeply and sincerely apologise to anyone to whom my previous comments have caused hurt or distress.”

Mr Ryan said he was extremely disappointed with the way the allegations were published.

“I feel there was a severe lack of fair procedure and any kind of journalistic ethics. I hope this emerges more fully over the coming days.”

In an article published online on Thursday afternoon, Trinity News – which approached Mr Ryan for comment prior to publication – defended its reporting of the story.

“At all times, in every story we publish, we strive to treat serious allegations with the utmost sensitivity. We also strive to meet high standards of journalistic ethics and integrity. We are satisfied that we have done both in our reporting of this story,” it said.