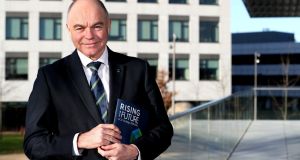 Prof Andrew Deeks, president of UCD, with Rising to the Future, the university’s strategy document for 2020-2024: ‘We rethought our Plan B and Plan C in order to come up with this ambitious, but achievable, plan.’ Photograph: Jason Clarke

If there really is a funding crisis in higher education, you wouldn’t know it to look around UCD’s sprawling campus at Belfield, south Dublin.

Cranes on the skyline are a sign that thousands of new student beds are under construction on campus.

Work is due to get underway soon on a Giant’s Causeway-inspired “centre for creativity” which will dominate a new entrance to the university from the Stillorgan dual carriageway. It’s part of a €190 million “future campus” initiative which includes state-of-the art teaching, learning and research facilities for students and staff.

And the university plans to hire 500 academic staff over the next five years and expand its student numbers to 32,000 within the coming decade.

Just a few years ago, UCD president Andrew Deeks was warning that the university was considering capping Irish student numbers due to cuts in Government funding.

So, are UCD’s plans for the next five years – unveiled at a ceremony yesterday – a sign that the bad times are over?

In an interview, Prof Deeks insists the warnings of recent years were very real. Since then, he says, the college has gone back to the drawing board and plotted out a future where it is less reliant on the State and producing more of its income privately.

Domestic student numbers are projected to rise over the coming decade due to a population bulge which is moving through second level.

The university is also eyeing up expansion in the number of lucrative international students. UCD is now producing the bulk of its income – about 65 per cent – privately. However, the university is still under Government-imposed controls such as a cap on hiring new core staff, as well as salary levels for academics.

Prof Deeks says it is time to “empower” universities and give them greater flexibility to hire, though he concedes there is still a strong role for the State.

“We could certainly get more effective results by having more flexibility around some of these things, which are more in line with our European compatriots and competitors,” he says.

As for the areas in which student numbers – and career prospects – are likely to grow in the coming years, he says it is clear that areas such as engineering and computer science will be in demand.

But he says many disciplines are likely to change rather than contract with the influence of technology and the importance of sustainability.

What employers want is also changing. Prof Deeks says they want more rounded graduates with a wider array of skills and attributes.

“As well as technical skills, there is an increasing importance placed on people skills and self-management skills . . . and people who are resilient and can withstand new pressures. ”

Whereas companies were pyramid-shaped in the past, with lower levels of skills at the bottom and those with a wider array at the top, he says employers resemble columns now.

“Because there is so much routine work being done through technology, the people that they take on at the bottom, they want to be the people that can move all the way up . . . So, that means they’re looking right from the start for more skills in a way that wasn’t the case in the past.”