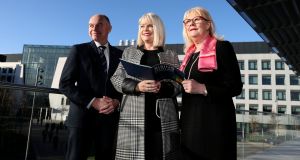 UCD is planning to enrol thousands of additional students and hire more than 500 academic staff over the coming years under expansion plans which, it says, will make it the largest third-level institution in Ireland.

The university is projecting that its student numbers will grow by 25 per cent over the next decade – up from about 25,000 to 32,000 – driven by a combination of domestic and international students.

UCD president Andrew Deeks said this growth is likely to be in areas of high student and employer demand, such as engineering and computer science.

The plans are contained in the university’s five-year strategy, which was launched on Wednesday by Minister of State for Higher Education Mary Mitchell O’Connor.

As part of these plans, the university is aiming to reverse austerity-era cuts which saw class sizes grow considerably.

While student-faculty numbers were 17:1 before the recession, they plunged to 23:1, significantly out of line with norms in developed countries.

Prof Deeks said the planned growth in academic numbers over the next five years will see this reduce to 16:1.

“This planned growth in faculty numbers provides us with the opportunity to build our capacity in areas of opportunity and need,” Prof Deeks said. “We will ensure that these additional [staff] are excellent in both research and teaching.”

The bulk of the 500 additional academic staff – about 370 – will be hired under the university’s Ad Astra fellowship scheme. These five-year contracts – worth up to €85,000 a year – are aimed at attracting promising early-career academics.

Prof Deeks said public-sector recruitment caps mean these posts will not be permanent, but he said the university hopes to be able to retain many top performers after their five-year contracts expire.

The remainder – about 150 – will be hired in line with the growth of student numbers in faculties.

The expansion in student numbers comes as the university is about to commence the first phase of its €190 million “future campus project” at Belfield.

This will result in the construction of a dramatic new campus entrance plaza which will house a new centre for creativity and centre for future learning. The bulk of this is being funded by loans, private income and State funding worth €25 million.

In addition, the number of student beds on campus is set to grow from 3,000 to 6,000, including a new village hub.

Underpinning its new strategy are key themes and objectives, which include creating a sustainable global society; transforming through digital technology; and building a healthy world.

UCD, in line with all third-level institutions, saw austerity-era cuts in State funding which forced it to generate more private income.

Latest figures show more than 60 per cent of UCD’s funding is now generated privately from sources such as international student fees, research, industry and property rental.

UCD, which styles itself as Ireland’s “global university”, attracts about 8,000 international students each year, who pay significantly higher fees than Irish students. These numbers are projected to grow by about 25 per cent over the coming years, which is likely to see the university become even less dependant on State funding.