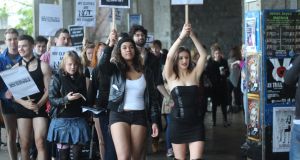 Like most students at UCD, Darragh Miller contributes to the daily hive of smartphone activity on campus.

There are dozens of helpful Facebook groups for various classes where he can ask other students for help and clarification on deadlines.

But delve a little deeper and there is a series of unsettling chat groups such as Spotted: UCD Gym/Sports Centre or Girls I’d Shift if I was Tipsy.

The groups typically include testimonies which range from light- hearted to subversive bullying.

“Most of it tends to be perceived as ‘banter’, like a picture of someone with a builder’s bum on campus or something more innocuous,” says Miller.

“I don’t see it like that. It’s like the boundary between what happens in real life and online is being blurred.”

That’s why he, like many others on campus, was not surprised when allegations surfaced last week about a private Facebook messenger chat page in which a large group of students was said to be sharing explicit images of female students with whom members claimed to have had sex.

A report in the College Tribune newspaper claimed that about 200 students, mostly in agricultural science, were part of the group, in which they shared and rated pictures of women on campus. The news quickly went viral across social media.

UCD responded by pledging to investigate the claims and to confirm whether any students were involved in posting images of their peers without their consent.

The students’ union rushed to announce plans for mandatory workshops on sexual consent for all students.

The controversy has brought into sharp focus the prevalence of bullying and sexual harassment on college campuses, along with growing anxiety about whether technology is amplifying this kind of behaviour.

At the same time, there is bafflement among an older generation at how young people willingly share intimate photos of themselves which can easily be manipulated for more sinister purposes.

Over recent days, however, many have been questioning the accuracy of the story in the first place.

The article was based on one person’s “understanding” of what was said to be taking place in the group, while there has been no first-hand evidence of its activities.

UCD authorities in their investigation have found no evidence of a group of this nature or with the number of students said to be involved.

Regardless, many students feel there is a problem around “lad” culture in general in the wider higher education sector that needs to be tackled.

“I do not like to generalise, however from conversations I have had about it, this sort of behaviour is considered the norm among certain groups of ‘lads’,” Moloney said.

“Unfortunately, those involved do not see the negative and enduring implications of what they have done. We need to create a society where such actions are shamed . . . The presence of Yik Yak [a social messaging app] and the accessibility of social media has amplified this form of misogyny.”

Opinion is divided among male students who have rowed into the debate online this week. Many insist that women, too, are complicit.

“I can absolutely guarantee you that somewhere out there are many groups of women doing the exact same thing as these ‘men’,” says Cormac O’Connell, a UCC student.

Another male student commented online: “If you send a picture to someone, you’re no longer in sole ownership of it . . . you take the risk that someone else can access it.”

Tadgh Bentham (23), a UCD student, says whether the Facebook group exists or not is not really the point: he says there is a wider issue with the objectification of women.

“We know this is happening in different colleges and there is a culture that it’s okay to share this kind of information,” he says.

Miller, who studies philosophy at UCD, says the prevalence of screens and devices means people in a younger generation can be less empathetic and do not see the consequences of their behaviour.

“If someone doesn’t see the impact of what they’ve done, there’s no barrier to sharing these pictures . . . They don’t see that it’s not funny. They don’t see a person’s reaction. It’s an extreme example of how boundaries are blurring.”

The issue has also raised the controversial issue of mandatory sexual consent classes for students, and whether young students nowadays need to be schooled in the basic dos and don’ts of what constitutes healthy sexual behaviour.

While some see them as a kind of “neo-puritan” behaviour and a lurch towards a smothering political correctness on campus, students’ unions and college authorities increasingly see them as necessary.

NUI Galway has introduced “smart consent” workshops for some of its students on a pilot basis this academic year.

This, it said, was partly based on a survey in which 25 per cent of female respondents said they had had a non-consensual sexual experience. For men, the figure was just under 5 per cent.

This week, UCD’s students’ union followed suit when it pledged to introduce consent classes and work with other groups to help change “lad” culture in UCD, which they say is the root of the problem.

“We’re not going to pass the buck,” the student union said in a statement, signed by UCD student leaders Marcus O’Halloran and Hazel Beattie. “We will change ‘lad’ culture in UCD as promised following our election to office.”

But there are allegations, too, of hypocrisy.

While the UCD students’ union has condemned the alleged Facebook group, some say the union was aware of it late last year and did not take any action against it.

Some students complained during his campaign to be elected that the would-be president had “liked” many of the posts.

He later apologised, stating that his involvement had been unacceptable and that the group was not representative of views on gender equality.

Louise O’Neill, author of Asking For It, which addresses issues of sexual assault and rape, has played a central role in putting these issues on the national agenda.

She helped spearhead UCD’s “#NotAskingForIt” campaign - aimed at tackling sexual harassment – and led a “slutwalk”, in which students were urged to promote the message that consent can never be implied or assumed from a person’s clothing.

She feels that that while consent classes are a “brilliant idea”, work required to tackle attitudes which objectify women must begin far earlier than at third level.

“We need to talk to young men and women about healthy sexual relationships,” she says. “Otherwise, we’re failing them: we’re not giving them the tools to survive.

“I speak to students in a lot of secondary schools. But there is still a real squeamishness around talking about sex.

“Generally, you’re not allowed to mention the word ‘rape’ to anyone below fourth year. Yet we’re okay with kids in fifth or sixth classes are reading books like Hunger Games, which is incredibly violent . . . We need to grow up and address these issues.”