TUI overwhelmingly votes to back industrial action over two-tier pay

Teachers’ union says members have ‘run out of patience’ 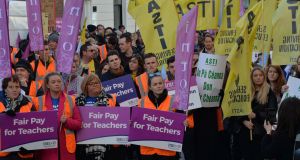 Teachers from the Teachers’ Union of Ireland as well as the INTO and ASTI protesting over pay equalisation in 2018. Photograph: Alan Betson

Teachers’ Union of Ireland (TUI) members have voted overwhelmingly to renew their mandate for industrial action over two-tier pay rates.

The ballot was passed by a margin of 92 per cent to 8 per cent to endorse the union’s mandate for industrial action, up to and including strike action, as part of its campaign for equal pay.

While much of the two-tier pay gap has been restored in recent years, teachers’ unions say a significant shortfall remains between teachers hired since 2011 and their longer-serving colleagues.

Last April, on the eve of teachers’ conferences, the Government pledged to give the two-tier pay issue “full consideration” either in a new pay review mechanism or in the context of the next round of pay talks.

However, there is no clarity yet on the scope or timeline of any such review.

The TUI said the ballot result made clear that members were united and prepared to take industrial action should the process of pay equalisation not be completed in the near future.

TUI president Seamus Lahart said: “Yet again this year, a new cohort of teachers has entered the profession being paid at a lesser rate than their longer-serving colleagues for carrying out the same work. Progress has been made in this campaign, but our members have run out of patience with the Government’s failure or unwillingness to complete the process of pay equalisation.”

Industrial relations observers say the prospect for imminent industrial action is slim and that any work stoppages would likely involve action by at least two or three teachers’ unions.

However, say some, the issue may flare up if there is little sign of two-tier pay being tackled in the context of a new pay deal.

The TUI says the largest differences in pay between those employed before and after 1st January, 2011, still occur in the early years of employment, with new entrants to second-level teaching earning 14 per cent less on initial appointment and 10 per cent less in the first 10 years than they would have before the introduction of cutbacks.

The union says most new entrants to teaching do not secure a contract of full hours upon initial appointment, with many earning just a fraction of the whole-time salary.

Mr Lahart said pay discrimination was the “single greatest cause of the crisis of recruitment and retention in schools across the country”.

A survey of principals in a sixth of the country’s second-level schools carried out by TUI in April found that over the previous six months, 94 per cent of schools experienced teacher-recruitment difficulties, while 68 per cent of schools advertised positions to which no teacher applied.

While the TUI voted in favour of the current pay deal last year, the TUI said this ballot was aimed at “refreshing” a mandate it received for industrial action in September 2017.