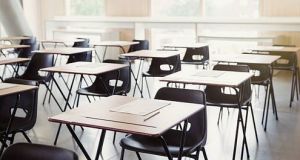 The Irish National Teachers’ Organisation and Teachers’ Union of Ireland executives have already recommended to their members that they reject the deal. Photograph; Getty Images

The country’s biggest secondary school teachers’ union looks set to recommend to its members that they reject the proposed public sector pay deal.

The move means all three teachers’ unions may end up voting against the draft agreement.

The Association of Secondary Teachers, Ireland (ASTI) announced on Tuesday that its standing committee would advise the union’s 180-member central executive to reject the proposed deal.

ASTI president Ed Byrne said that while some of the proposals contained in the draft agreement would provide benefits for teachers, it would not eliminate unequal pay. “In addition, the draft agreement does not contain any commitment to reduce the Croke Park hours which teachers find unproductive and disruptive to their core work and duties.”

The ASTI’s central executive council will meet in early autumn to discuss the draft agreement.

The Irish National Teachers’ Organisation (INTO) and Teachers’ Union of Ireland (TUI) executives have already recommended to their members that they reject the deal.

The INTO, which is currently balloting its 36,000 members, says its rejection is based on the “failure of the proposed agreement to progress the issue of pay equality”. Its ballot is due to close on July 11th.

The TUI has also said it will recommend its members reject the deal due to “wholly inadequate” provisions addressing lower pay for new-entrant teachers. It is due to ballot members in the early autumn.

The Government has defended the proposed terms on the basis it would provide a “generous” starting salary of more than €37,692 for new teachers from October 2020 onwards. One source said if pay parity was fully restored, starting salaries for many new teachers would rise to almost €44,000.

The proposed deal was drafted after 13 days of talks between worker representatives and Government negotiators. It comes with an anticipated bill of about €880 million but it requires the ratification of trade union members, a process unlikely to conclude until the autumn.

A further 50,000 staff recruited since 2013, who have a less generous pension scheme, would receive pay improvements of 7 per cent and 10 per cent over the three-year period.