Children should be able to attend local school ‘regardless of religion’ 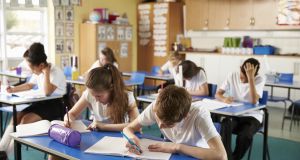 The draft legislation is aimed at making admissions to schools fairer and more transparent. Photograph: Istock

An Oireachtas committee has recommended that all children should be able attend their local school regardless of their religion or belief.

It also proposes new guidelines for schools in relation to students who opt-out of religious instruction. These pupils should be provided with “accessible alternatives”.

The committee has noted this is in line with children’s constitutional rights and recommendations from the UN’s committee on rights of the child.

The Oireachtas committee proposals are are contained in a report which examines the Education (Admission to Schools) Bill 2016, which is due to be debated in the Oireachtas shortly.

While the draft legislation is aimed at making admissions to schools fairer and more transparent, it does not address the so-called “baptism barrier”.

This is being dealt with by Minister for Education Richard Bruton separately.

He has pledged to either limit or remove the barrier, which allows schools to discriminate on the basis of religion in their admissions policies.

The committee also proposes that powers be given to education authorities to prevent children with special needs from being turned away from certain schools.

It says it is imperative that the National Council for Special Education be given the statutory power to require schools to establish an autism or special needs class where they identify the need of any such child.

On the issue of access to schools for siblings, it says it is imperative that children be given the right to attend the same schools as their brother or sister.

The committee also notes that oversubscription of schools is a major problem, especially in urban areas.

It says this is down to a “serious lack of resources” in the education system in built-up areas that have grown substantially over the last number of years.

On access to Irish-speaking schools, it recommends that “due regard” be given to the right of native Irish speakers to receive their education through the medium of Irish and that the new admissions bill must not interfere with this right.

The committee report says it hopes that its observations will be taken on board by the Minister for Education when the bill is scheduled for committee stage in the coming days.