Three new technological universities may be established by next year 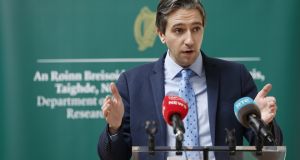 The number of technological universities may grow from two to five by this time next year, according to Minister for Higher Education Simon Harris. Photograph: Crispin Rodwell

The number of technological universities may grow from two to five by this time next year, according to Government Ministers.

Two more applications for technological university designation are expected in the coming months and may be in a position to secure their new status by January of next year.

Speaking at an Oireachtas Committee on Education on Tuesday, Minister for Higher Education Simon Harris and Minister of State Niall Collins said these changes would amount to a “radical shift” in the higher education landscape.

Mr Collins said regional technical colleges and, subsequently, institutes of technology have delivered an excellent service in providing vocational, technical, technological and professional skills and qualifications to generations of students over the past 50 years.

The strengths of the sector reside in their strong links with local and regional business and enterprise and their practical approach to teaching and learning excellence, informed by applied research, he said.

These institutions have provided pathways for progression into higher education which, through either geography or circumstance, may not have otherwise been within the reach of many young - and not so young - people.

These new universities will continue to offer a range of qualifications ranging from apprenticeships to PhDs.

Mr Collins said TU Dublin, for example, is vying with UCD to be the largest higher education institution in the State.

Future technological universities will benefit from a “region-centric, multi-campus approach” with he opportunity to increase investment, skills creation and research capacity.

While the bid to create a university in the South-East has been beset with internal rows, Mr Harris said it was his clear intention to “ expand the imprint of higher education in Waterford”.

He said it was vital that a “divisive campaign” is not allowed to develop, which would be unfair to both institutes and to the staff who were working to create “something of real benefit to the entirety of the region”.

Mr Harris said there was no truth to rumours that the headquarters for the new university will be based in Kilkenny.

This question, he said, will be settled by the new governing body for the merged university, and that he will be appointing “sensible” people to this group.

Mr Harris said the concept of a technological university was founded on a merging of equals and parity of esteem, and he hoped everyone would seek to assist and advance the proposals positively.

Separately, Mr Harris confirmed that he has raised the issue of human rights concerns over links between Irish and Chinese universities with college presidents.

Responding to questions from Senator Rónán Mullen, Mr Harris said he understood these issues would be raised at the governing bodies of the universities.

He said while it was national policy to forge education links with China, there were also wider ethical issues to be considered.