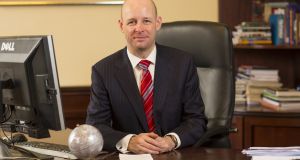 Prof Philip Nolan, president of Maynooth University: “What we see when we talk to students – even among the highest achievers – is that they are on a learning journey.”

More than 40 years ago the points system was introduced to level the playing pitch for students seeking entry to higher education.

Over the past decade, however, it became clear that it had been exploited and manipulated. Universities and colleges had taken advantage of a perception that high points courses were superior and offered improved long-term prospects. This resulted in a surge in the number of small prestige courses, often with fewer than 10 students, which required high entry points.

Many criticised the practice for placing additional pressure on students and restricting their choices. Under pressure from the Department of Education and within the university sector itself, institutions agreed to reduce the number of low-intake, prestige courses by 2017. But progress has been patchy among universities and virtually non-existent in the case of many institutes of technology.

While some face internal and administrative challenges in providing broader entry routes, others seem reluctant to change what is seen by many as a marketing tool to attract high-quality students.

The irony is that the two universities that have led the charge in introducing broader-entry courses – UCD and Maynooth University – have been reaping rewards in terms of increased demand.

UCD, for example, has seen the number of courses more than halve from more than 80 to just over 40. Take its science courses – prior to 2012, it had about 12 separate specialised science programmes, ranging from astro-physics to theoretical physics. Now, the vast majority of science programmes are through a single science route.

“We’ve taken that same approach with law, engineering and other areas,” says Mark Rogers, registrar and deputy president of UCD. “Our experience has been that the number choosing UCD is going up: the number putting us in their top three or four options has gone up . . . There’s not a single instance where it has proved a negative.”

Maynooth University has seen its highest level of first-preference applications with record numbers applying for the first year of its reformed undergraduate curriculum.

“It was a bold proposition, but it also involved certain risks,” says Prof Philip Nolan, president of Maynooth University. “We weren’t entirely certain that students would understand it, or accept that is is a better proposition.”

As part of its new curriculum, students have the choice of specialising immediately or exploring options across a range of disciplines in first year and specialising later.

Students appear to like the added flexibility. This was reflected in a recent survey of 1,500 Leaving Cert students by Maynooth University. It found a majority (59 per cent ) believed a broad education was useful for their long-term career. A similarly high proportion (62 per cent) were not sure what career they would like to pursue.

“What we see when we talk to students – even among the highest achievers – is that they are on a learning journey, and their precise course and their ultimate destination are not fixed or clear,” Prof Nolan says.

“A third of those targeting 550 points still didn’t know what course they wanted to take at third level when surveyed at the beginning of the academic year.”

“These students are right: what we really need are adaptable, critical thinkers who will be ready to tackle a variety of challenges in their long working lives,” he says.

The initiative may also help to reduce first-year dropout rates, though it is too early to say for sure. Research shows that the single biggest reason for students dropping out of a course is that they made they wrong CAO choice.

Prof Nolan, meanwhile, feels it is only a matter of time before the wider system moves more decisively to offer students the kinds of flexibility and choices they want.