First day of school: It’s the parents crying - not the children

Balbriggan's Educate Together opened their doors for a new year of junior infants and there was tears and laughter as the new students grappled with the curriculum. 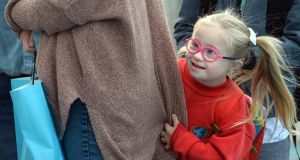 Sorcha Maguire, hiding behind her mother before her first day at school in Balbriggan Educate Together in Co Dublin. Photograph: Dara Mac Dónaill/The Irish Times. 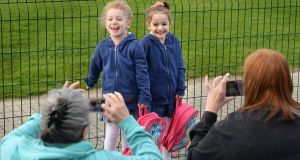 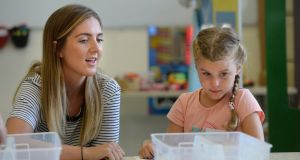 There were tears and sniffles aplenty on the first day of school – but that was just the parents.

Most junior infants, well-versed to a world of pre-schools and childcare, eased into their new classrooms, oblivious to much of the fuss around them.

Parents dabbed their eyes and lingered at the door for a final glimpse of their little ones, before being gently reminded by teachers to move on.

That was the scene played out at Balbriggan Educate Together national school in Co Dublin and repeated in many other primary schools as the new academic year got under way.

Sarah McCormack and Julie Kells admitted that most of the morning had been spent trying to hide their tears from their children who were both starting school today.

“I messaged Julie this morning saying, ‘are you crying?’. And she replied ‘ yes: for the fifth time,” she said.

“When they’re at home, you’re protecting them and now we’re sending them off into the world. You won’t be there for them. You hope they mix well and they listen to the teacher.”

Sarah’s daughter, Madison (4), meanwhile, bounced into class. She gave a twirl as she showed off the princess dress she wanted to wear for the occasion.

“She looks like she’s going to a wedding,” Ms McCormack laughed. “Tomorrow, she’ll be in leggings and a T-shirt.”

It was a morning of high emotion for Sorcha Maguire’s parents. She was born with Down Syndrome and congenital heart disease, which required two open-heart surgeries when she was still an infant. 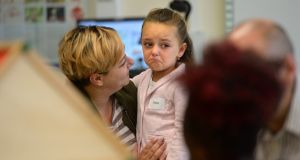 In Pictures: Their first day at school

“We weren’t sure we’d ever see this day,” said her mother, Collette Maguire. “Her cardiologist said at one point that it’s only her fight that’s keeping her alive.. and it’s what has her here today. She wants to be like everyone else.”

Sorcha, carrying her favourite Mr Tumble schoolbag, giggled and played with her older brother’s hair as she waited to enter her new classroom.

“There’s been lots of emotion and excitement at home this morning,” said Collette. “The school has been great and worked closely with us to make sure it all goes smoothly. She’s more than ready. She’s the most sociable child. She’ll be an asset to the class and loves mixing with kids.”

Anna Alecsandrescu, originally from Romania, felt conflicted as she waved goodbye to her twin daughters, Jamine and Daphne. “I’m a bit emotional, yes. But I’m happy to see them in junior infants. I like this school and what it stands for.”

The twins played happily with colouring books as she left.

Another parent, Alexander Kuksjonok, lingered by the door of the classroom to see how his daughter Alisa was faring without him. She sat colouring in a workbook, seemingly without a care in the world.

“I’m happy to see that she looks happy,” he said.

The fact that parents are more likely than pupils to break into tears these days is a change which junior infants teacher Bronagh Lavin-Dixon has witnessed over recent years.

“The children have nearly all been to pre-school before. They are used to the routine, to sitting down, to getting into a line, asking to go to the toilet which wasn’t the case, say, 10 years ago,” she said. “The separation from parents can still be an issue and parents can help by showing there’s nothing to be scared of, that it is a safe space and they will be back.”

Balbriggan Educate Together, like many other schools around the country, has witnessed startling changes over the past decade.

It opened in 2005, just when a crisis was blowing up in the town over a shortage of school places for foreign nationals.

Many non-Irish who found themselves frozen out of the education system, flocked to the new primary school, along with other multi-denominational schools built in the following years.

Those concerns have since melted away, said Mr McCutcheon.

Today, the school has a mix of Irish and non-Irish which reflects the community. It is also well-resourced and benefits from being part of the Deis scheme for disadvantaged schools.

“Our children want for nothing,” Mr McCutcheon said. “We’re are as well a resoured a school as St Gerard’s in Bray, and that’s without taking any voluntary contributions. Our standardised attainment scores equate with the most middle-class areas in Dublin or elsewhere... We’re hugely oversubscribed with 346 applications for 48 places this year.”

Meanwhile, it’s back to job of settling in the newcomers: there are nerves to be soothed and worries to be addressed.

He heads off, not to the classroom, but to a coffee morning upstairs for frazzled parents of junior infants.

“The first day of school is not quite as daunting as it used to be for children,” he said. “That said, there can still be the odd tear or two.”