The Secret Teacher: What’s the point of punishing students who won’t do their work? 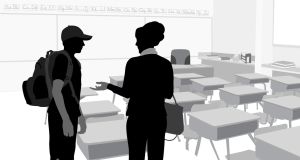 Active learning is finally within reach and yet we risk letting it slip through our fingers. For years now educational thought has been promoting what students can do for themselves, but that’s yet to be reflected in many Irish schools. The masked armies that fill our classrooms wait for us, the teachers, to get the show on the road. But it’s important they realise that they themselves are the show.

One of the very strongest cords in Irish education history is the bond that ties teaching and learning, and it needs cutting. Covid-19 has presented us with an opportunity to sever it once and for all, unless teachers actually enjoy being bound by the shackles of having to know how Johnny or Mary is getting on and what more we can do for them.

Teachers contribute to this unhealthy dynamic by chasing up students’ work and punishing those who don’t do it. What is that teaching adolescents? Certainly very little that will be of any service to them in the world of work. There they will either get on with their work or risk losing the job to someone else.

The amount of time wasted on trying to make someone do something they obviously aren’t willing to do seems ridiculous, not to mention futile, as very often the person is deliberately not doing it. In sincere cases the work materialises soon enough – often accompanied by an apology. This validates following up missing work, but actively striving to make repeat offenders turn good is something which needs to be taken on very cautiously. Not least because the eager learners are left waiting.

I teach in excess of 200 students per week, and that generates both volume and variety in the explanations and excuses I hear. These don’t change with the years either, although the greater emphasis on digital technology as a result of moving online has introduced new twists on an old script, “I thought you said it was for tomorrow” being a real favourite, hotly followed by “I did the wrong one”.

It goes without saying that there are various versions of the work not being in the room: “It’s in my other copy”, “I did it on a page and I can’t find it”, “It’s at home”. I always like it when this one expands into daring to show horror at my scepticism, as though the evidence that it’s been done is under my nose and I’m refusing to see it.

Reality check: my doubts are entirely grounded in evidence; your defence is grounded in literally zero reality if there is no work in the room. Just engaging in those exchanges conditions the students to lead us into them. “No work in the room, fine – I’ll move on to someone who does have it” would be a perfectly healthy response.

The single biggest evidence we have that the focus is skewed right up the education ladder lies in where the additional work and pressure landed this summer. Leaving Cert students left school on March 12th, and it is difficult to know what they did in the subsequent weeks.

That isn’t a slur on anyone, merely an observation that from a learning perspective we literally don’t know what they were doing. And yet they were the ones being academically tested.

The country is united in sympathising with the Leaving Cert class of 2020, and nothing in this piece is intended to counter that, but the pressures and strains they faced were not academic. Their passage to university was devoid of the demonstration of learning that normally accompanies this milestone event. The teaching had occurred over an 18-month period; it was the learning that needed airing and measuring, and yet the pressure to deliver landed firmly back on those whose work had already been done. (Is it any wonder that we collectively scratched our heads at this transferring of the burden on to us?)

Teacher-pupil encounters can be about small steps forward, realistic goals, perseverance and resilience

There is a famous graphic illustrating the importance of not judging a fish by its ability to climb a tree, a quote often but not definitively attributed to Albert Einstein. The reality in classrooms all over the world is that sometimes the battle for the student is akin to teaching a fish to climb a tree.

We too rarely acknowledge that and meet the student at precisely the level of ability, motivation and desire felt on their side. Instead we hurt the human connection by insisting that they do something entirely against their will. We complain to their parents and assign punishments. Think about the likely success of those measures, and ask yourself if punishing the fish would send it up the tree any faster.

There are learning opportunities here around how we teach; teaching is not about making learners learn, it’s not about coercion but about encouraging, inspiring and supporting. Teacher-pupil encounters can be about small steps forward, realistic goals, perseverance and resilience. Patience, kindness and empathy are then more effectively demonstrated in classrooms.

Don’t mistake this for a plea for less pressure on teachers. It is an appeal to cut the unhealthy bond tying teaching (the teacher’s job) and learning (the pupil’s affair), which is not what education is about.

Educere (Latin): to lead forth, bring out, develop – a process in which active learners prepare for the realities which lie ahead in college and beyond