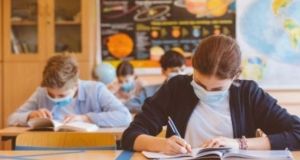 Schools are facing staff shortages while teachers are required to self-isolate while awaiting Covid-19 test results, the Association of Secondary Teachers in Ireland (ASTI) has said.

In some cases, schools were missing up to 10 teachers who were absent while waiting for test results, ASTI president Ann Piggott said.

The contract tracing system in schools needed to be much faster, as there are current delays of up to a week for close contacts of positive cases to be identified in some cases, she said.

While transmission rates of the virus from children were low at 2.4 per cent, if there were a lot of cases in the community this was “bound to be replicated” in schools, she said. There was a fear asymptomatic children could transmit the virus to teachers, she said.

“We’ve asked for rapid testing, but it has to be safe and reliable,” Ms Piggott said. It could take two days for test results to come back and a further four days for contacts to be identified and traced, she said.

An initial rapid testing system could be used to identify cases for further testing, Ms Piggott suggested. “Teachers are very fearful, they would like schools to be opened in a safe way,” she said.

The unions have called for more detailed information on the number of positive cases in school settings, and a fast-track testing system to be put in place, similar to healthcare settings.

The Government has strongly ruled out previous suggestions that the October mid-term break in schools would be extended for an extra week, due to the rising number of coronavirus cases.

The Department of Education has said a national network of new school teams, to be led by public health professionals and supported by education officials, will be established when schools return on November 2nd.

This aims to speed up the time it takes to alert schools to close contacts of positive cases, as well as supporting principals to find substitute teachers and special needs assistants in cases linked to Covid-19 absences.

Health authorities are also understood to be considering rapid testing for Covid-19 in schools.