The new way of learning 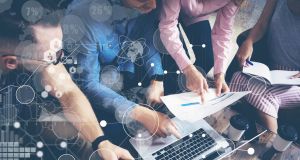 Students sitting their Leaving Cert next June may not have noticed, but college courses and entry routes have been changing radically in recent years.

Instead of picking a specialised degree course such as marketing or mechanical engineering and moving straight into a related career area, students are increasingly being encouraged to choose a broad degree such as science, business or arts, and then specialise down the line. Meanwhile, many colleges are allowing students from one course to take modules from another, giving them a more flexible degree.

What’s behind these changes and what do students need to know about how to get the most well-rounded education?

Looking at that CAO handbook can be overwhelming. There are so many courses on offer and it’s hard to know which one is right for you.

Career guidance experts and some of the university presidents are in agreement about the need to reduce the number of specialised courses on offer at third-level.

Across the board, students are being encouraged to plump for broader choices such as arts, commerce, law or science. However, this appears to be happening too slowly and, in some institutes of technology, the number of courses has actually increased.

The explosion of courses at third-level was a result of universities and colleges in search of a prestige boost offering too many high-points courses to small numbers of students. Put simply, it worked well for their marketing.

UCD and Maynooth have, to-date, led the way in reducing the number of entry routes for students and, as a result, demand for places in those two universities is on the rise.

It’s all about giving students flexibility, says Prof Philip Nolan, president of Maynooth University, whose curriculum allows them the option of making subject choices from first year – or mixing and matching different subjects and specialising later. He says that it is reasonable to ask a student to choose between two broad subjects areas like computing and arts but that it’s generally unwise to ask them to pick between, say, computing or cloud computing.

Research shows that students are more likely to drop out of college if the course isn’t what they expected, and so higher education institutions have, in recent years, stepped up their game to ensure that college applicants have as much information as possible.

But for the relatively smaller numbers who do know precisely what they want to do in college, there remains a large number of very specialised courses they can still choose from.

Prof Sarah Moore is dean of teaching and learning at the University of Limerick which recently introduced a joint arts programme with Mary Immaculate College, and she’s also the chair of the national forum for the enhancement of teaching and learning in higher education. She says that there is still lots of choice for students. “There is a huge appetite for broad-based programmes that give students a taste of different subjects but allow them to make specialised choices down the line. That said, there are still some students who are almost born with a vocation and so the specialist courses are can be the right choice for them.”

In 2005, UCD was the first Irish university to play with new ways of learning. The Horizons programme offered a fairly simple but radical alternative to the familiar degree routes of arts, architecture, agriculture, engineering, science and so on.

The new system meant that, for instance, medicine students could take a module in an arts course like philosophy or history, a commerce student could take law modules to help them better understand regulatory frameworks, or a philosophy student could consider some physics modules. Students could consider taking modules that were connected to their course; UCD’s healers and healing module in folklore proved particular popular with veterinary medicine students who wanted to understand the role of traditional folk medicine in animal care. Or, they could move outside their comfort zone and simply take a module that grabbed their attention.

This was the start of a series of changes that are slowly transforming the landscape of higher education in Ireland.

UCD may have kicked it off, but other universities have embraced the trend, with Maynooth University taking the driving seat in recent years. Prof Philip Nolan was the registrar in UCD when Horizons was introduced and, when he became president of Maynooth University in 2012, he was keen to bring about changes there too. He believes it is more important than ever that researchers from different disciplines work together to tackle key problems.

“Take the problem of climate change,” he says. “The science of climate change is clear. But if we are to tackle it, we need to convince people to go about their lives differently, and this needs input from the social scientist. So meteorologists and climate scientists can’t just work alone.”

Indeed, some of the most innovative changes are happening at Maynooth. In 2017, they became the first university in Ireland to allow students to combine arts and science in the same degree. Students choose a broad entry path and, further down the line, will have options to specialise.

Trinity College has also brought in a number of modules that allow students to step outside their primary discipline and take on other subjects, while UCC is also moving towards a modular system.

The standard of teaching at third-level is improving dramatically. Twenty years ago, lecturers who wanted to become better teachers didn’t have a lot of options.

Now, there are many. This is good for students who, previously, may have been thrown from the spoon-feeding environment of secondary school into the free-thinking world of third-level where they are expected to self-directed learners and critical thinkers. Some, understandably, floundered.

“Today, most higher education institutions don’t just have orientation programmes: they also pay attention to the transition from second to third-level,” says Prof Moore. “The Leaving Cert, while it is often very fact-based, does require a certain rigour in students. But they don’t always know what to expect when they arrive in university and different disciplines have different requirements and ways of teaching. Today, colleges and third-level teachers help students to gradually get to know the environment and take a more active role in their own learning. The gradual development of critical capacity is what good teachers do.”

Closed book exams are now less important at third-level. Most college courses will now contain some form of continuous assessment. Writing on twitter, UCC law lecturer Conor O’Mahony said that he has moved to 24-hour take-home exams in constitutional law to reward analysis and reasoning rather than simply speed and memory.

Meanwhile, group assessments and projects are also growing in importance, and the national forum is leading the way on innovating here. One interesting project, Geolabs, sees collaboration between all the national third-level geoscience units (UCC, NUI Galway, Trinity and UCD) and the Open University which gives students access to a virtual microscope and lets them work at their own pace instead of being limited by lab access.

“The 2017 Irish Survey of Student Engagement showed that student feedback is being heard and used to improve teaching and learning,” says Moore. “But we’re not innovating for the sake of innovation and have to ensure students are not over-assessed. It should be well-paced and well-organised and that is feeding into our approaches.”

Panel: More than a college course – the new skills of third-level

A bunch of CVs from graduates with 2:1 honours degrees lands on an employer’s desk. Which one will she read first?

Undoubtedly, she will look to see what stands out; graduates who have shown an interest in life outside books and the college bar have an edge. Employers are looking for the teamwork, communication and leadership skills that are developed through college clubs and societies.

Don’t get us wrong: clubs, societies, the students’ union and the college papers offer fun, friendships and the opportunity to create something, and only the most cynical get involved in college life just to impress an employer. But it is a bonus.

Some universities are moving to formalise the extracurricular side of college life and give student a credit for their activities. DCU leads the way here, with its Uaneen module – named after DCU graduate Uaneen Fitzsimons, a popular TV broadcaster who died in a car crash at the age of 29 – is a structured module that rewards students for involvement in college life and helps them to reflect on what they have learned.

UCD, which has long offered the “president’s award for excellence in student activities” is also creating modules to give students credit for their extracurricular activities.

The transition from second to third-level can be a big shock for many students. For most of the Leaving Cert, the focus is on rote learning and memorising facts, but college assignments and essays require students to show they can analyse information and be critical thinkers with their own evidence-based opinions. Increasingly, third-levels are grasping the importance of helping students learn how to learn.

The new skills centre at UCC runs different skills sessions for college students to help them master critical thinking, writing, graphs and charts and the transition to college. The writing workshops focus on a few different areas including sentence and paragraph structure, building academic arguments and grammar and punctuation.