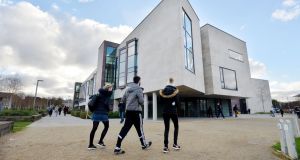 Affluent students are far more likely to study high-points courses in university and earn more within months of graduating than those from less well-off backgrounds, a new study finds.

Medicine, dentistry, finance and engineering courses attract the highest proportions of well-off students from the wealthiest parts of the country, according to the Higher Education Authority (HEA) research.

By contrast, agricultural, environmental, social work and childcare programmes have the highest proportions of students from poorer backgrounds.

Not surprisingly, affluent students are more likely to earn significantly more within months of graduating from college. But even where students study the same course in the same institution, an average affluent student stands to earn 30 per cent more than an average disadvantaged student.

When measured by individual college, the highest proportion of affluent students attended the Institute of Art, Design and Technology in Dún Laoghaire (35 per cent), followed by UCD and the Royal College of Surgeons in Ireland.

Trinity College Dublin was not included in the data due to data protection concerns, which have since been resolved. Letterkenny Institute of Technology had the highest proportion of disadvantaged students (24 per cent), followed by IT Sligo and IT Tralee.

Overall, the proportion of affluent students is much higher in the university sector. Institutes of technology, on the other hand, are more likely to reflect the social profile of the national population.

A breakdown of students’ CAO points scores also shows the extent to which high points are strongly associated with affluent backgrounds.

For example, among students scoring 405 to 600 Leaving Cert points, more than one-quarter – 27 per cent – were from affluent backgrounds, compared with just 3 per cent from disadvantaged areas.

This pattern was the reverse for students scoring below 200 points. A total of 24 per cent in this category were from disadvantaged backgrounds and 8 per cent were from affluent areas.

Of all college courses, the class gap in medicine is most stark. For example, while about 15 per cent of the wider population are defined as affluent, more than 36 per cent of enrolments in medicine courses are people from affluent backgrounds.

Similarly, while 15 per cent of secondary students nationally are defined as disadvantaged, just 3.5 per cent of medicine enrolments are students from such backgrounds.

While medicine offers one of the highest-earning career opportunities, medical students are among the most subsidised students in the country by the taxpayer.

The findings are contained in a new study by the HEA which shows the most detailed picture yet of the socio-economic profile of college students.

The data, compiled from students’ addresses, is based on enrolments during the 2017/18 academic year.

Caitríona Ryan, the HEA’s head of access policy, said the study’s findings will support institutions to develop more targeted approaches to widening access in their regions.

The Irish Universities Association said its members have been proactive in encouraging and supporting students from less well-off backgrounds.