Leaving Cert likely to get under way on July 29th, Minister says 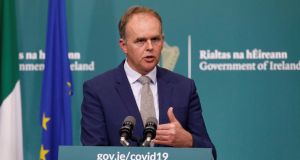 The Leaving Cert exams are likely to get under way on Wednesday, July 29th, the Minister for Education Joe McHugh has said.

In a live Instagram interview with the youth website Spunout.ie, Mr McHugh said he hoped to be in a position to formally announced the date in consultation with education partners soon.

However, he said he was keen for exams to begin on a Wednesday so students do not face five days of exams in their first week.

A more detailed timetable will not be finalised until early June, he said, as officials want to have the most up-to-date advice available before making decisions.

For example, he said at present the maximum time a small group can spend in a room together is two hours, which would impact on the timing of exams.

Mr McHugh also said holding the Leaving Cert in late July is Department of Education’s “plan A” and all efforts will go towards making this happen.

He acknowledged, however, this was based on the assumption that the public will continue to abide by public health restrictions and that the Covid-19 curve is flattened further,

“We’re looking at plans, B, C, D and E... there are so many moveable positions. The best answer is that at this point in time, we’re working on making it [July/August exams] happen,” he said.

“Yes, we could face enormous challenges that we’re not in a position to make predictions about.”

He said his department had looked at the option of using predicted grades, but ruled it out at there was “too much inherent bias” in the system and they would not be fair.

“There’s the practicality of teachers’ grading nieces, nephews, sons or daughters, or teachers who are easy markers or hard markers... we don’t feel the policy of predicted grading is a fair system,” he said.

The Minister also said there is no standardised system of continuous assessment in Ireland.

On the question of whether students could have been given predicted grades, along with the option of sitting exams in autumn, Mr McHugh said this would have introduce two options and a “big, big decision” had to be made,

In relation to the digital divide and students losing out, he said he hoped to be in a position to make an announcement on this shortly.

He said his department has been in talks with the Department of Communications over access to mobile data for students who do not have broadband.