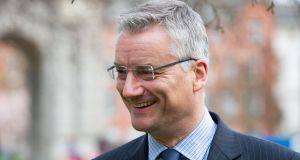 Dr Patrick Prendergast reassured secondary students hoping to study at Trinity that it will welcome new students in the autumn. Photograph: Tom Honan

The provost of Trinity College Dublin has said new students may end up starting college “slightly later” this year on foot of disruption to education linked to the coronavirus pandemic.

In a video message to students, Dr Patrick Prendergast reassured secondary students hoping to study at Trinity that it will welcome new students in the autumn.

“ I can only imagine how difficult this situation is for you. At this time when you should be focusing on preparing for your exams, you find everything is uncertain and up in the air,” he said.

“But let me reassure you, that come the autumn, we will be welcoming many of you to our campus. It might be slightly later than in previous years. It might be under slightly adjusted criteria.

“But we will be welcoming you. Every autumn, the university renews itself through the influx of new students.

“This autumn, more than any previous one, it will be a new beginning indeed. When this crisis is over, I look forward to embarking on that journey with you, together.”

The Irish Times reported this week that Leaving Cert students could end up sitting deferred exams and starting college as late as October or November under contingency plans being discussed by senior education sources.

While official plans are to press ahead with the Leaving Cert in June as planned, the Department of Education has been engaging with a range of education stakeholders over alternative plans in the event that the exams do not begin in June as planned.

While senior figures have emphasised that discussions are at an early stage, several sources have confirmed that the option of deferring exams until late summer and starting a new third level academic year in the autumn are being “seriously examined”.

Some higher education institutions have signalled that they would be in a position to delay the start of a new academic year for first-year students by up to two months if necessary.

In his video message, Dr Prendergast also confirmed that Trinity will take a “financial hit” from the coronavirus fallout across all its revenue streams and that extra costs will be incurred.

“On the plus side, there are no immediate financial issues. In the last five or six years, we’ve worked tremendously hard to secure the college finances which means we can weather this storm, at least for the moment,” he said.

“We have time to plan. We won’t let our mission in education, research and innovation be derailed.

“I’m not saying there won’t be challenges, seen and unforeseen. But we are fortunate in our remarkable global community - we know that you will work with us to secure the future of our great university.”

Dr Prendergast said teaching at the university was now entirely online and almost all exams will be also completed online.

In addition, April’s graduations will be live-streamed and students conferred with their degrees in absentia.

He also provided new details over the college’s decision to ask students to leave college accommodation, where possible, after eight cases of coronavirus were confirmed among the Trinity community.

The move sparked controversy among some students who criticised the university’s handling of the matter.

“ This was on the advice of Trinity GPs who were particularly concerned that the shared living accommodation in rooms and halls makes self-isolation very difficult, and who emphasized the need for swift action in the face of such a fast-spreading virus,” Dr Prendergast said.

“However, students who cannot return home for a variety of reasons are remaining in college accommodation - the reduction in numbers staying means that we can better look after everyone.”