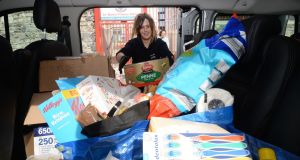 While most teachers are giving remote classes online during the school closures, one teacher is delivering something even more important: meals for pupils in disadvantaged areas.

Síle McDonnell, a teacher and home school community liaison with St Mary’s Primary School on Dorset Street in Dublin’s north inner city, works with the vulnerable families in her school.

In normal times, the school provides a breakfast and lunch to any pupil who needs it. “The children are fed from the moment they get into school and then they are sent home with food too,” she says.

With food no longer going to students in school, McDonnell took it upon herself to start dropping it to the families that have children in the school.

McDonnell had been using a rented GoCar to deliver the meals as she does not have a car, but now has access to a minibus normally used by the School Completion Programme in the area.

Since starting, she says it is clear the need is even greater than she ever anticipated.

“I went to a house dropping food to the family that have children in the school and loads of people came out asking ‘please can we have food?’,” she says, “The need is massive.”

After putting out an appeal for food on social media, restaurants and businesses have responded in droves.

“People just started emailing left, right and centre,” says McDonnell. “Some of the emails are just heart-breaking. People are so kind I just can’t get over it.”

While McDonnell is currently able to deliver food to families, there is uncertainty around how long she can continue to do so in light of movement restrictions - so the school is planning ahead.

She is aware that people may have been concerned about the academic impact of school closures but, for her, the welfare of her families is her key concern.

“This is bigger than children taking a little bit of time out of school, they’ll catch up, we are all in the same boat,” she says. “I can just imagine that there is panic about the academic side, but for me the welfare is the massive thing and food is the priority.”

Seán Drugan in The Vintage Kitchen restaurant in Dublin, is one of those who responded. He has cooked up nearly 300 meals ranging from seafood cajun pasta to lamb with wild garlic ragu and spaghetti. School dinners, it seems, never tasted so good.

While McDonnell’s efforts relate to a single school, there is a growing recognition that a co-ordinated response is needed to ensure up to 250,000  children who rely on the school meals have some replacement service.

On Thursday, the Government moved to confirm that funding was still available for school meals and urged local services to provide weekly boxes of groceries for families during the school closures.

Schools have also been advised that if their current meals provider is unavailable to continue the service they can look at other options, such as a local charity in the community providing food or meals or sourcing supplies from an alternative provider or retailer.

Éadaoin Kelly, principal at St Mary’s says greater flexibility over how funds for school meals programmes are spent is to be welcomed.

“There are ways to make sure that the money is spent the right way but I think schools are best placed to identify the families that need it most,” she says. “We are conscious that we might go into a lockdown, so we are looking ahead and thinking of buying vouchers and things like that to give to families.”

The school has set up a GoFundMe pageand an email address (adinneraday@gmail.com) for people who cannot provide food but who want to help.