‘Students are super-stressed. They don’t know when the exams will be’

Coronavirus: Leaving Cert students feel anxious and uncertain over what lies ahead 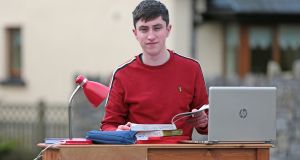 Like tens of thousands of students, Luke Casserly’s phone has been pinging with messages from friends wondering what is going to happen with the Leaving Cert exams.

“It’s all ‘What’s the story with our orals, will they be cancelled?’ or ‘Is the whole Leaving Cert going to be cancelled?’ ‘Are we going to have to repeat the year?’ These are just some of the texts I’ve been getting over the past couple of days, but unfortunately I’ve no answers.”

Luke had been preparing for his Irish and French orals, which were due to begin at the end of this month. Then there is the matter of project deadlines for history and geography courses, which are due shortly.

With schools set to remain closed well beyond the end of March and possibly until the summer, he says students feel they have been plunged into uncertainty.

The Department of Education says it is working with the State Examinations Commission to develop contingency arrangements for the exams.

In the meantime it says schools will be asked to continue to plan lessons and, where possible, provide online resources for students or online lessons.

This is easier said than done for Luke, and many others, whose lives, until now, have been scheduled around the Leaving Cert timetable.

“I’m working away doing my own bit of study and linking in with my teachers on Google Classroom – the effectiveness of this is yet to be seen for me so far – but it’s hard not to be distracted by those uncertainties and the wider Covid-19 crisis,” says Casserly, a member of the Irish Second-Level Students’ Union.

“I’ve spoken to a number people who have put huge amounts of study in for the orals, which were scheduled for the coming weeks, but now they’re super-stressed and panicked because they just don’t know when they’ll be, or if they’ll take place at all,” he says.

“There’s a lot of uncertainty, especially among students who worry that the Leaving Cert exams in June will be cancelled – people are beginning to wonder how it will affect the CAO situation and how courses will be allocated in the event no exams take place in June.

“It’s early days yet and, as the days and weeks go by, this stress and worry will only get worse until we have a bit more clarity. “