English language students told they will not receive refund 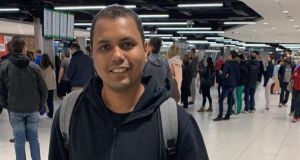 Luiz Santana Barroso: the Brazilian student shares a room with three others, and four other people also live in the home they rent in Crumlin.

English language students have been told they will not be refunded money they have paid in advance for classes following the closure of all schools last week to contain the spread of the coronavirus.

Students at the IBAT language school in Dublin city centre, which says it offers programmes to more than 1,500 people from 45 countries, received an email at the weekend informing them that refunds would not be available on courses cancelled as its closure was being enforced by the Government.

One student said she had paid €1,750 in advance for six months of classes. The college’s website says general English courses cost €165 per week for morning classes and €145 for afternoon lessons.

The school’s payment terms and conditions say it is “not liable or responsible for any failure to perform or delay” classes when they are affected by events outside the college’s control – a situation it describes as a “force majeure event”.

Force majeure events include any “non-occurrence, omission or accident” beyond the college’s reasonable control including “epidemic or pandemic”, it says. The school did not respond to a request for further comment.

English language schools across the State have been closed since last Thursday after Taoiseach Leo Varadkar announced the closure of all educational institutions until at least March 29th.

Language student Filiz Yalcin has been told her new term will start on March 30th “subject to permission from the Irish Government to reopen”.

The Turkish journalist, who moved to Ireland to learn English and works part-time in a hotel, is worried about how she will afford to live in Dublin over the coming weeks.

“I was working at a hotel but the customers are gone and there is no job at the moment. The schools do not give our money back and students don’t know how to pay rent in this difficult situation,” she said.

“Now everybody is panicking and my family has called and say they want me to go home, that everywhere is very dangerous. But I don’t want to go back so early, I love my school here and have met a lot of good people.”

When she arrived Ms Yalcin paid €500 a month to share a room with three students in Dublin 7. She is now paying the same amount for a room in an Irish woman’s home so is not worried about the spread of the virus there.

Luiz Santana Barroso, however, is more worried about self-isolation.

The 29-year-old Brazilian student shares a room with three others, and four other people also live in the home they rent in Crumlin.

Mr Barroso usually does not see his housemates as he works as a cleaner in a supermarket and leaves home at 2am each day for the early shift. However, the group have held a meeting to discuss the virus and agreed if someone becomes ill they must self-isolate in the livingroom where there is a sofa to sleep on.

“Sharing a room is really scary right now but I think it’s ok because everyone in my house is taking care and not going to parties. Everyone is scared but rent is expensive here, you can’t afford to live alone,” he said.

“Now would be a bad time to go back to Brazil because we don’t know what’s happening in airports and there’s a risk of the virus if you travel. The best thing you can do right now is stay where you are.”

The Department of Justice confirmed on Friday that all international students attending English language courses would be “considered to have met their attendance requirement for the shutdown period”.

However, it said students will still be required to renew their registrations through the Irish Naturalisation and Immigration Service (INIS) as usual.