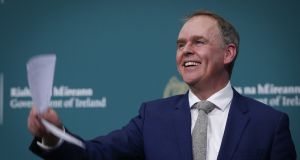 Last November, then minister for education Joe McHugh advised schools across the south Dublin area that he was preparing to activate new legislation which could compel schools to accommodate children with special needs. Photograph: Crispin Rodwell

Dozens of primary schools across south Dublin are to be forced to open special classes for children with autism due to an acute shortages of places.

The move is aimed at sourcing places for at least 80 children with special needs who do not have any school place with just weeks to go before the start of the new school year.

The Minister for Education’s decision to direct schools to open the classes follows a long-running campaign by parents who say there is a “black hole” of appropriate school places in the area.

Many parents say their children with autism have been refused places from dozens of schools in the area, with schools saying they are over-subscribed or not equipped to enrol children with additional needs.

As a result, many are availing of home tuition or forced to travel long distances across the city in rush-hour traffic to access school places.

A spokesman for the Department of Education said the names of 39 individual schools which will be required to provide classes for four- and five-year-old children will be published later on Friday.

Initially, a total of eight special classes need to be established to cater for 43 children in September, while an additional 38 special school places are required for children with more complex conditions. More classes and places are likely to be required next year.

Many primary schools argue that they are unable to open special classes due to capacity constraints, or due to concerns over a lack of resources and support for special education.

The direction to set up classes also comes at a time when many say they are under pressure to adapt schools to reopen safely in light of the coronavirus pandemic.

Last November, the then minister for education Joe McHugh advised schools across the south Dublin area that he was preparing to activate new legislation which could compel schools to accommodate children with special needs.

However, figures compiled by campaigners indicate there are still no special classes at primary level for children with autism in Dublin 2, 4 or 6, while there is just one class in Dublin 6W.

Miriam Kenny, chairperson of the Involve Autism campaign group, said parents who are unable to access appropriate school places are under “phenomenal stress”.

“There are many autistic children who attend their local schools but there is a cohort of children who need and are recommended for the support of an autism special class,” she said.

“Many of our parents have applied to over 30 schools across Dublin. If they are lucky enough to get a place for their child it means that their child ends up travelling out of their community, past their local schools and across the city in a bus or a taxi.”

Ms Kenny said there were also a number of children in inappropriate mainstream settings due to the lack of autism special classes.

“Many of our children are excluded from their local schools due to the lack of autism special classes and as a result you and your child are in turn excluded and isolated from the local community,” she said.