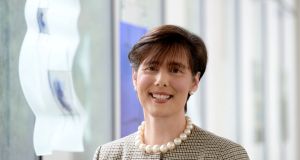 Minister for Education Norma Foley: ‘We are moving towards the safe reopening of schools, with an accommodation for everyone in the entire school community.’ Photograph: Alan Betson

All pupils may not be in a position to return to school in September on foot of new public health guidance which says schools should reopen with physical distancing of at least one metre between students in most cases.

The Department of Education warned last month that any form of physical distancing would lead to many students being forced to attend school on a part-time basis.

However, a department spokeswoman said this estimate was made without the benefit of health guidance, and many more students will be likely to be able to attend full-time.

The extent to which schools will be able to reopen as normal will be determined in conjunction with education stakeholders over the coming weeks, she said.

However, some teachers’ unions have warned that a full return to school is unlikely, and some form of “blended learning” may be required.

At primary level, the new guidance says a distance of one metre should be maintained between desks or individual pupils. This will not be mandatory for classes from junior infants up to second class.

At second level, physical distancing of at least one metre – and two metres, where possible – should be maintained between desks or between individual students or staff.

The interim guidance, produced by the Health Protection Surveillance Centre, was published on Wednesday evening.

Minister for Education Norma Foley said the guidance would lend itself to the “optimum” reopening of schools.

When asked if schools may not be able to fully reopen, she said it was difficult to be definitive.

Sinn Féin’s education spokesman Donnchadh Ó Laoghaire said the department needed to “get a grip” on school reopening plans which, he said, were mired in confusion.

Labour’s education spokesman Aodhán Ó Ríordáin said it was impossible to see how schools could fully reopen without a financial package.