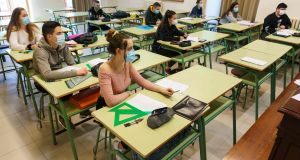 New public health guidance published today says schools should reopen with physical distancing of at least one metre between students in most cases.

The recommendations appear to throw into doubt Government plans to reopen schools to all pupils on a full-time basis without any physical distancing.

Some teachers’ unions have warned that a full return to school is now unlikely and some form of “blended learning” may be required for students who cannot attend school full-time.

The Department of Education last month warned that physical distance requirements of one metre could result in some year groups attending school just twoe and a half days a week.

However, a department spokeswoman said this estimate was based on a distance of one metre between students’ desks rather than individual students. As a result, many more students will be able to attend school full-time under the new guidelines.

The extent to which school can reopen as normally as possible will be determined in conjunction with talks with education stakeholders over the coming weeks, she added.

At primary level, the new guidance says a distance of one metre should be maintained between desks or individual pupils.

This will not be mandatory for classes from junior infants up to second class, on the basis that younger children are unlikely to maintain physical distancing indoors.

At secondary level, physical distancing of at least one metre - and two metres, where possible - should be maintained between desks or between individual students or staff.

The interim guidance, produced by the Health Protection Surveillance Centre, was published on Wednesday evening.

The new Minister for Education, Kerry-based Fianna Fáil TD Norma Foley, said the guidance would lend itself to the “optimum” reopening of schools.

“It is interim advice, as what is current now may not be current in two or three week’s time. I’m very conscious of that,” she said,

When asked if schools may not be able to fully reopen, she said it was difficult to be definitive.

Second level teachers unions, meanwhile, have warned that a full -scale re-opening of schools for all students may be unlikely this autumn.

In a submission to the Oireachtas committee on Covid-19 which sits tomorrow, the Association of Secondary Teachers Ireland (ASTI) suggested that some form of “blended” model of education provision may be needed for large classes.

ASTI general secretary Kieran Christie will tell the committee: “Enormous difficulties will also have to be overcome in the management of practical classes in woodwork rooms, metalwork rooms, art rooms, PE, music and home economics, together with the cleaning requirements necessary between classes ... we think that a phased return to school may be necessary”.

No matter how creative schools are in using their available rooms and facilities, Mr Christie said they will not be able to accommodate everyone on a full-time basis.

“Even a one metre social distance task will be extremely difficult, but not insurmountable,” he said.

The union said it would be unacceptable if different social distancing rules were to apply to facilitate the re-opening of schools than were in place in other workplaces or in wider society.

It said it had a significant number of members with underlying conditions or were immuno compromised or were living with others in similar categories.

It said these teachers were “extremely worried about returning to workplaces that placed them in greater danger of contracting or transmitting the virus than if they worked in another environment”.

The Teachers’ Union of Ireland (TUI) will tell the committee its members have no magical immunity to Covid-19 and must be treated as are other workers.

“They must have confidence that their safety is being protected and that they are not being lulled into or forced into a false and dangerous sense of security. Other workers are protected by social distancing, developed and comprehensive return to workplace plans carefully implemented, personal protective equipment where necessary. Teachers ask no more than to be treated with the same level of concern,” the union says.

It said the piece of the jigsaw that had been missing and that was most needed was clear direction about social distancing.

“We assume, but do not yet know, that the current requirement of two metres is likely to be modified. We hear various commentators speculate or insist that there will be no social distancing requirement at all in a school setting, or at least in a classroom setting.

“However when we, as practitioners, whose workplace is the classroom, consider the practical logistics of a school, its less than generous dimensions, its congested corridors, its limited entry and exit points, its often inadequate toilet facilities, we are not convinced or satisfied that schools can reopen safely, given current circumstances, in the absence of some defined metric regarding social distancing.”

The TUI said it was also concerned “that some of the public discourse is peddling a myth that the virus is not transmitted by children”.

“While there is evidence that young children are less susceptible to the virus than other cohorts of the population, it is also the case that older students have been shown both to contract and to transmit the virus.”

The Irish National Teachers Organisation (INTO) said there was frustration among schools across the country that this much-needed guidance was not published earlier.

INTO general secretary John Boyle said the union has consistently stated that public health advice must be paramount in decisions around schools’ reopening.

“We will examine the published documents in detail and will continue to work towards reopening in a manner, and with resourcing, which minimises risk,” he said.

Among the interim reports other recommendation include

* Face coverings for teachers are not, in general, considered necessary as they conceal facial expression and can make communication difficult. However, it is acknowledged that wearing a visor may be an appropriate alternative in situations where there may be behavioural issues or tending to intimate care needs;

* Pupils, staff members and visitors who are ill or who have symptoms should not attend school;

* A public awareness campaign will be necessary to reinforce the message to parents, pupils and staff not to bring their children to school if the child has symptoms of a viral respiratory infection or if there is someone in the household suspected or known to have Covid-19;

* Removal and storage of furniture will be necessary in order to comply with the recommendations that space should be maximised, and class space should be reconfigured to maximise physical distancing.

* Additional class resources will need to be purchased in order to comply with the recommended minimisation of sharing of tablets / toys / educational materials e.g. play dough should only be for individual use.