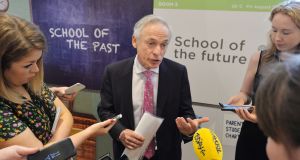 A circular issued by Minister for Education Richard Bruton requires that students who do not want to participate in religious instruction or worship be timetabled for alternative subjects. Photograph: Alan Betson

The Association of Trustees for Catholic Schools has warned Minister for Education Richard Bruton that moves to allow children to opt out of religion classes may be in breach of the law.

Until now, students who did not want to participate in religious instruction or worship were mostly required to sit at the back of the class.

However, a circular issued this year by Mr Bruton and which has come into force for the new academic year requires that such students should be timetabled for alternative subjects.

The rules affect up to 150,000 pupils attending hundreds of State-run secondary schools and community schools.

Voluntary secondary schools, typically run or owned by religious organisations, are not affected by the circular.

The board of the Association of Trustees for Catholic Schools – which represents patrons and boards of management at Catholic schools – wrote to Mr Bruton earlier this year to express its “surprise and deep disappointment” that no consultation had taken place with the Catholic patrons of community schools.

“It appears that for some unexplained reason the decision was taken not to consult. This in itself is a cause for further concern,” it stated.

The association noted that community schools with shared Catholic patronage were established under “model agreements” with the objective of contributing to the “spiritual, moral and physical well-being and development of the community”.

It said these deeds of trust had specific provisions regarding religious education.

“It is not clear to [the association] how the Minister is entitled to issue a circular letter requiring boards of management to make particular arrangements for religious worship or religious education in the context of a community school or community college . . . where the terms contradict the express obligations cast upon the school and patron.”

It added: “The board of the association is currently considering whether the recent circular constitutes a legitimate and lawful interference with the rights of its affiliated members, which rights, as you are aware, are protected by the Constitution as well as by provision of the Education Act 1998.”

While parents have a constitutional right to withdraw their children from religious class, schools have not been obliged to timetable them for another subject up to now.

Many State-run schools charged with implementing the new directive say they do not have the resources to implement it fully, even though the circular has come into force.

They are concerned that so many students will opt out of religion that it will put schools under major strain in terms of providing other subjects, with limited staff numbers.

The body which represents these schools – Education and Training Boards Ireland – said it had “sought clarification” on the implementation of the new regulations.

It said schools in the sector “will maintain the status quo in relation to the provision of religious education and opting out until clarification is received”.

In a statement, the Department of Education said it was continuing to have discussions with interested parties about the circular in relation to clarifications sought.

“The department has been clear that all Education and Training Board and community post-primary schools are expected to carry out the provisions in the circular.”