Sharp rise in students living at home due to accommodation crisis 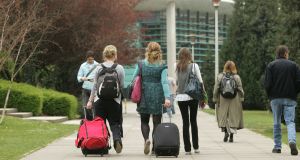 The survey shows that seven in 10 students say they have to take part-time jobs to offset third level costs while more than a third skip lectures to work. Photograph: Alan Betson

There has been a sharp increase in the number of third-level students living at home as a result of a spike in rental costs, according to a new survey.

In addition, a third of all students say they are missing lectures because they need to earn money.

The annual research from the Irish League of Credit Unions has found that 90 per cent of Irish parents cover the cost of third-level education for their children, spending an average of almost €600 a month.

Half of those parents told pollsters they have to cut spending in other areas to meet those costs while six in 10 expect to get into debt due to third-level costs with the average expected debt put at €2,425 per child per year.

The survey shows that seven in 10 students say they have to take part-time jobs to offset third level costs while more than a third skip lectures to work.

The dramatic spike in rental costs in recent years is starting to bite with students living away from home spending double what those living in the family home spend.

Students’ unions have warned that the bulk of on-campus accommodation has already been snapped up, with students forced to look for digs or in the private rental market.

UCD students’ union president Barry Murphy said at least 3,000 first years are on a waiting list for on-campus accommodation. However, less than half that number can expect to get a place.

“We’re advising new first years to look for digs. They give some peace of mind to parents and they are safe and work well for those who don’t know the Dublin area too well,” she said.

“But students will need to hit the ground running. They need references and they need to start looking now.”

Aisling Fagan, DCU’s vice-president for welfare equality, said many students may have to defer taking up a place due to the “extortionate” cost of accommodation.

“It is genuinely pricing students out of their education and it is not fair,” she said.

“I’ve had panicked parents of returning students ringing me from all over the country saying their child isn’t eligible for grants for particular reasons, and so they simply cannot afford to send them back to college.”

She also said digs were the only realistic solution for many students seeking a bed.

The Irish League of Credit Unions says the numbers reporting that they live at home has increased, with 69 per cent saying they lived at home during the last academic year compared with 63 per cent the previous year.

When asked about accommodation costs for students, 96 per cent said these costs were either extremely high or very high.

Students living outside of home say they are paying more than double what those living at home spend for the college term.

Parents who help fund their child’s third-level education estimate they pay €584 per month during the college term. This has increased from the average €535 monthly contribution last year.

Money issues remain the biggest concern for all parents of college students with 42 per cent saying it occupied their minds most.

It has increased in importance since last year when a third said finance was their biggest college-related concern.

In comparison, just 16 per cent say their biggest worry is that their child won’t get a job after college, while 13 per cent are mostly concerned about misuse of alcohol and drugs.

All told, 54 per cent of parents say they are particularly stressed about paying for accommodation during the college term.

The online survey of 610 parents of third-level students and 466 students was carried out in July 2018 by i-Reach Insights.