Nphet ‘not anticipating’ advising against schools reopening after midterm 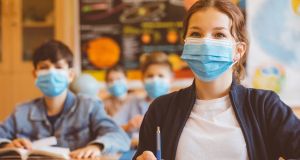 Nphet says that the data on positivity rates in schools suggested that they are not drivers of infection. Photograph: iStock

The chief medical officer Dr Tony Holohan has said he does not anticipate the National Public Health Emergency Team (Nphet) advising the Government not to reopen schools at the end of the midterm break.

He said Nphet would meet this week for a fuller assessment of the trends of recent days. Dr Holohan was speaking on Tuesday evening after the Department of Health confirmed a further five deaths associated with Covid-19, bringing the total in the State to 1,890. A further 720 cases were confirmed,with four out of the past five days recording fewer than 1,000 new cases.

Dr Heather Burns, deputy chief medical officer, said that the data on positivity rates in schools suggested that they are not drivers of infection. In primary schools, 2.7 per cent of close contacts of confirmed cases are testing positive, she said, and in secondary schools the corresponding rate is 2.1 per cent. In the wider population, 10 per cent of close contacts test positive.

She said this was “reassuring” and added that there has been “considerable buy-in in terms of implementing public health guidelines and keeping schools a safe environment for our students”.

Meanwhile, the Association of Secondary Teachers Ireland (ASTI) is due to receive the results of a ballot for industrial action over concerns it has over the safety of staff Wednesday afternoon.

The ASTI has raised concerns over testing and tracing turnaround times and “inconsistencies” over the definition of close contacts in schools.

The union said schools are facing staff shortages while teachers are required to self-isolate while awaiting Covid-19 test results. In some cases, schools were missing up to 10 teachers who were absent while waiting for test results, ASTI president Ann Piggott said.

The contract tracing system in schools needed to be much faster, as there are current delays of up to a week for close contacts of positive cases to be identified in some cases, she said.