Rise in pupil numbers exempt from Irish study due to stress 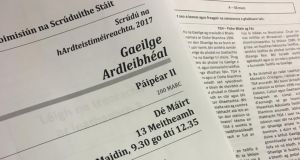 The Department of Education is understood to have proposed a series of changes which would relax and clarify rules around Irish exemptions, especially in the areas of special needs Photograph: Carl O’Brien

A review of the system for awarding exemptions for the study of Irish has revealed an increase in number of pupils securing opt-outs on the basis of “stress or anxiety” linked to the study of the language.

The finding is contained in an unpublished Department of Education review of Irish exemptions which finds the system is “not fit for purpose”, according to well-places sources.

While Irish is compulsory at primary and second level, there are opt-outs available for pupils with special needs or who have been abroad for a period of time.

However, there have been concerns within education circles that the system has been “gamed” to allow some students opt out of what is considered by many to be the most difficult school subject.

A review by the department’s inspectorate is understood to have found a wide variety of different practices and arrangements among schools, who have the authority to grant Irish exemptions under department rules.

In addition, there is no appeals system for students or parents who believe they have been wrongly refused exemptions.

The report finds these circulars are no longer fit for purpose in addressing the “diverse needs of young people in our schools.”

The department is understood to have proposed a series of changes which would relax and clarify rules around Irish exemptions, especially in the areas of special needs.

Under these draft circulars, psychological assessments will no longer be required to process an exemption for the study of Irish on special needs grounds.

A child’s IQ would also no longer be used as a diagnostic tool, which is considered to be an outdated mode at assessing a child’s learning ability.

Instead, exemptions would be based on children’s learning difficulties using their identified need rather than a formal diagnosis.

The age at which children may be automatically granted an exemption if they have received their education outside the State would be raised from 11 to 12 years or age, or the end of primary school

In addition, any child who had spent three years outside the Irish education system may be exempt from 12 years onwards.

There would also be exemptions for child refugees and children or diplomatic or consular staff.

An appeal mechanism would also be introduced for the first time for pupils who believe they were wrongly refused an exemption.

The department is understood to be planning to publish the report along with a consultation paper and hopes to introduce the changes in the 2019/20 school year.

The review may well trigger debate on whether or not Irish should be compulsory.

Fine Gael controversially proposed to remove obligatory Irish in advance of the 2011 general election, though the policy was shelved when it entered into coalition government.

The party’s then leader Enda Kenny argued that Irish should be made an optional subject after the Junior Cert.

Mr Kenny, a fluent Irish speaker, said the policy of compulsion had led to a “pervasive, negative association” with the language among many young people.

The move was opposed by Fianna Fáil at the time which said it would spell the “death knell” to the language.

Party leader Micheál Martin said there was evidence of a “tremendous renaissance” of the language with growing popularity of gaelscoileanna.