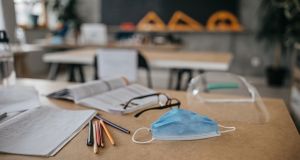 The Teachers’ Union of Ireland’s executive committee has expressed its “strong position” that these students should return and benefit from face-to-face teaching provision. Photograph: iStock

Special classes for almost 3,000 students attending special classes in secondary schools are to set to reopen February 22nd after the Government reached agreement with teachers’ unions.

However, a deal to reopen secondary schools to about 60,000 Leaving Cert students in the final week of February is hanging in the balance after teachers’ unions were unable to reach joint agreement over a safe return to school.

The Teachers’ Union of Ireland (TUI) expressed its “strong position” that Leaving Cert students should return to schools during the week beginning 22nd February.

However, the Association of Secondary Teachers Ireland (ASTI) said school reopening plans were “inadequate” and needed to be substantially reworked in order to ensure a safe phased return of students.

Further talks s between both unions and the Department of Education are due to continue this week.

Following union meetings on Wednesday, Minister for Education Norma Foley and Minister of State Josepha Madigan confirmed that a return to in-school teaching for students attending special classes at post-primary level will begin from Monday 22 February.

This is the same day on which special classes in mainstream primary schools are due to return.

Ms Foley said said the Government was committed to the “full and safe reopening of schools for all students as soon as possible, and will continue to work with all stakeholders, in line with public health advice, to achieve this.”

They say these measures include full contact tracing and fast-track testing, provision of high grade PPE for special education teachers and arrangements for staff in high risk health categories and pregnant teachers to continue to provide remote learning.

The TUI and ASTI said their members would facilitate the reopening of special classes in post-primary schools from Monday, February 22nd, subject to public health advice.

TUI president Martin Marjoram said that while emergency remote teaching and learning continues, the union engaged “intensively and positively” with all education stakeholders to work towards the safe reopening of schools.

“In this regard, the union’s executive committee this evening decided that its members would facilitate the re-opening of special classes in post-primary schools from Monday, 22nd February given that a number of concerns expressed by the union have been addressed,” he said.

In taking this decision, he said the TUI acknowledged the “vital importance of face-to-face provision” and took note of the range of additional supports and measures that have been agreed to protect students and staff.

The ASTI’s standing committee has also directed its members to co-operate with the return of special education classes from February 22nd.

However, the two unions diverged on the issue of a return to school for Leaving Cert students.

The TUI said its strong position was that, subject to the advice of the public health authorities, Leaving Cert students should also return to schools during the week beginning 22nd February.”

Mr Marjoram added: “We will continue to engage on the sustainable re-opening of schools and all other related matters.”

However, the ASTI’s standing committee was of the view that the Government’s school reopening plans were inadequate and needed to be “substantially reworked in order to ensure a safe phased return of all students in the coming period of time.”

It said it continued to engage with the Department of Education on the safe re-opening of schools for other cohorts of students.