Women’s hour: Trinity set to elect a female provost for the first time 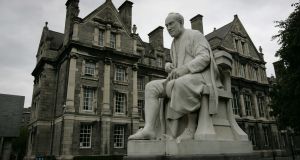 George Salmon, provost of Trinity College Dublin from 1888 to 1904. He was fiercely opposed to the admission of female students to the university. Photograph: Frank Miller

It’s more than a century since the former provost of Trinity College Dublin George Salmon is reputed to have said: “Over my dead body will women enter this college.”

On Friday at noon the university is set to confirm that a woman will take over the role of Provost of Trinity College Dublin for the first time since it was established in 1592 by Queen Elizabeth I.

An all-female shortlist of three senior academics will be officially announced which is understood to include Linda Doyle, dean of research; Linda Hogan, a theologian and former vice-provost; and Jane Ohlmeyer, a high-profile historian.

The successful candidate will reside in one of the most prestigious addresses in Dublin – No 1 Grafton Street – with an impressive art collection including works by Jack B Yeats. The 10-year position will be accompanied by a €200,000 a year salary.

To get there first, though, candidates must contend with a papal-style election process.

About 800 full-time academic staff are eligible to vote and the candidates will be vying for their support during more than a dozen hustings events due to take place between now and April 7th.

In normal times, the electorate gathers in Trinity’s dining hall to elect the new provost in a conclave; this year, voting will take place online.

The election of a woman as provost will be a milestone moment for the university, says Susan Parkes, former head of education in Trinity and editor of Danger to the Men? A History of Women in Trinity College Dublin.

“It’s been a slow process which many women have contributed to in their own way over the years,” she says.

Women were not regarded as equal members of the university after women were first admitted, she says.

“There was no residence on campus for women. They had to be off campus by 6pm and weren’t allowed to dine in the dining hall. It continued as a male, residential community for many years,” she says.

It wasn’t until the late 1960s when women were allowed to join debating societies and became eligible to be elected as fellows and scholars. Female students were also given rooms on campus for the first time.

“The election of Mary Robinson as president was also an important development,” says Ms Parkes.

Mrs Robinson – who was auditor of the college’s law society and became Reed Professor of Law, as well as a senator – was elected president in 1990.

“It showed that women in high office were very able. We all looked up to her. It gave people confidence that women could successfully run for public office,” she adds.

“Nowadays, there are plenty of women in leadership positions in the university. They are more than ready for it. If this happened 10 years ago, it would have been bigger news… it’s taken a long time.”

In fact, several other colleges got there first. There have been a number of female presidents of institutes of technology in recent years, while Kerstin Mey, interim president of the University of Limerick, appointed last summer became the first woman to head up an Irish university.

The current provost Prof Patrick Prendergast finishes up his term of office on July 31st; the in-tray facing the new provost will be daunting.

Managing the disruption linked to Covid-19 will be a key priority. The college’s finances have been badly hit while there is an urgent need to improve the university experience for 18,000 students who are learning remotely.

Tackling underinvestment in the college’s antiquated computer systems may be unglamorous, but many say will be key to improving efficiency and tackling bureaucracy.

Readjusting the college’s position in a post-Brexit world and building bridges with European universities will also be vital at a time when much of the college’s focus in the past has been on UK and US higher education institutions.

One certainty, says Ms Parkes, is the new female provost will end up breaking new ground.

“It will be a boost for women academics. To think it’s really not that long ago women weren’t even allowed in the university common room. They had to keep to themselves... I sometimes say to female students to this day, be sure to get your photo beside the statue of George Salmon, just to shows how far we’ve come.”