Schools will not close despite North’s two-week shutdown – Foley 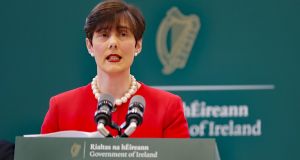 The closure of schools in the Republic is not under consideration at present Norma Foley has said. File photograph: Niall Carson/PA Wire

The closure of schools in the Republic is not under consideration at present and there are no plans to extend the mid-term break, Minister for Education Norma Foley has said.

An announcement on Wednesday that schools in Northern Ireland will shut for two weeks over the half-term Halloween break prompted fresh speculation that schools could close south of the Border.

However, Ms Foley said she was committed to keeping schools open and no such plans were under consideration.

“I am aware of the decision by the Executive in Northern Ireland and the Government will continue to work with the Executive, however, there is no plan to extend the mid-term break in our schools. The closure of schools is not a measure under consideration at present,” she said.

At a press conference on Wednesday evening, she said national and international public health advice was that schools were safe places due to the protective measures in place.

Ms Foley said her officials were in “continuous contact” with public health authorities.

As recently as Wednesday, she said, the HSE’s public health experts advised that all the available evidence showed that schools are not “amplification settings” for Covid-19 transmission.

She said although overall cases are increasing in the community, the proportion of cases for children aged 4-18 years remains stable at around 14 per cent.

“If school opening had amplified transmission, this proportion would increase as children and staff infected one another in the school setting,” she said.

She said authorities were also closely monitoring the detection rate of additional positive cases of Covid resulting from the mass testing being carried out in schools which is remaining at under 2 per cent.

By contrast, the national community test positivity detection rate is over 6 per cent.

“This again demonstrates that schools are safe and controlled environments and this is because schools are adhering to the public health guidelines developed for schools and being supported by significant additional funding,” Ms Foley said.

It has also emerged that more than 900 school staff who are highly vulnerable to Covid-19 have been permitted to work from home following risk assessments.

However a further 870 “high-risk” have been told they are not sick enough to stay at home.

Ms Foley said 1,785 teachers, special needs assistants (SNAs) and other support staff applied for a Covid-19 risk assessment, which are carried out by occupational healthcare company Medmark, for Department of Education.

Those who are very high risk are given an exemption from working at school and are available for remote work.

During Dáil education questions, Mr Ó Laoghaire said the “very high-risk category is extreme and specific and obviously there are particular provisions for that category”.

But he expressed concern about the review process and said “the high-risk category seems to take in everything from mild asthma to leukaemia”.

On the Budget, Ms Foley confirmed that the the reduction in class sizes announced this week would only partially apply to disadvantaged or Deis schools.

At a press conference over Budget 2021 measures, she said mainstream schools will benefit in addition to Deis band one schools.

The reduction will not apply to Deis band one junior and “vertical schools” with junior and senior classes.

Labour’s education spokesman Aodhán Ó Ríordáin said the reduced pupil-teacher ratio must be passed onto all Deis schools automatically. He said it was not good enough that Deis schools were an “after-thought”.

The Irish National Teachers’ Organisation said it was seeking an urgent meeting with the Department of Education to seek urgent clarification on the supports for Deis schools.

“For too long the Department has overlooked our Deis schools when modest reductions in general class sizes were secured. Singling out a small minority of these schools and ignoring the rest is a cause of great concern,” said John Boyle, INTO general secretary.