Schools in south Dublin among the most oversubscribed in the country 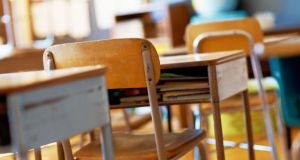 Schools in the south Dublin area are among the most heavily oversubscribed in the country, according to enrollment data published for the first time.

Under new admissions legislation, schools are required to publish annual notices disclosing the number of places available for applicants.

Muckross Park College, a second-level non-fee paying school for girls in Donnybrook, Dublin 4, was one of the oversubscribed secondary schools, according to available figures.

It had a total of 720 applications last year for just 120 first-year places, or six times the number of available place.

Belvedere College, a fee-paying school on Great Denmark Street in Dublin, received was more than three times oversubscribed. It received 550 applications for its 168 first-year places.

Gonzaga College, a fee-paying school in Ranelagh, was twice over-subscribed with 182 applications for 86 places.

Blackrock College was twice oversubscribed, although applications to first year are made to Willow Park Senior School. This school reported 407 applications for 208 available places.

Similarly, Castleknock College was almost twice oversubscribed, with total of 238 applications for 120 places in first year.

Many non-fee paying schools in the Dublin commuter belt also received far more applications than they could accommodate.

Drogheda Educate Together Secondary School received 193 applications for 73 places, while Presentation Bray in Co Wicklow was oversubscribed by a factor of almost three, receiving 320 applications for its 120 places,

Temple Carraig School, a non fee-paying secondary school in Greystones under the patronage of the Church of Ireland, was twice oversubscribed. It had 284 applications for 144 places.

The pattern of oversubscription was clear among many primary schools in the Dublin area as well.

Grace Park Educate Together National School, based on the campus of DCU’s All Hallows campus in Drumcondra, was oversubscribed by a factor of 12. It recorded some 736 applications for just 60 junior infant places last year.

Emer Nowlan, chief executive of Educate Together, said the big challenge facing over-subscribed schools was how to allocate places as fairly as possible.

“Educate Together allows policies which prioritise children living the near the school, siblings of current pupils, or older children, but we don’t allow policies that favour past-pupils or staff,” she said.

“Even then our schools are often turning away more children than they can accommodate. The only way to address this is to rebalance the system so the profile of school types matches the profile of parental demand, and progress on this has been very slow to date.”

Our Lady’s Grove Primary School in Goatstown, Dublin 14, was more than twice over-subscribed with 128 applications for 58 places.

St Mary’s National School on Belmont Avenue in Dublin was twice over-subscribed, with 175 applications for 90 places.

Taney Parish Primary School in Dundrum was oversubscribed by two and a half times, with 131 applications for 54 places.