Three principals and 14 teachers on administrative leave with full pay 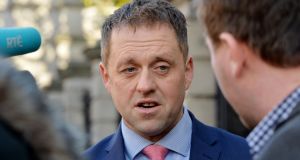 Thomas Byrne TD: “The department has an obligation to make these periods of leave as short as possible and conduct the investigations as expeditiously as possible.” Photograph: Alan Betson

Three principals and 14 school teachers are currently on administrative leave with full pay while investigations are being carried out, the Department of Education has said.

Administrative leave is a temporary leave of absence which may be granted when it is necessary for a teacher to be absented from work in order for an investigation to be carried out.

“It may only be granted in limited situations where the continued presence of a teacher has the potential to present an ongoing risk such as situations concerning child protection, serious misconduct or fraud,” the department said.

The department said in cases finalised last year teachers were on administrative leave for an average of two years.

The figures, which were released by the department, do not include teachers employed by education and training boards.

Diarmaid de Paor, deputy general secretary of the Association of Secondary Teachers Ireland (ASTI), said the length of an investigation would relate to the nature of the complaint and that sometimes a teacher falling sick because of stress could “delay the process”.

“Two years does seem to be quite a lot for the average. I wouldn’t be surprised that there were one or two cases [that long] but I would know of cases that only lasted a matter of weeks,” he said.

“Obviously you would hope that procedures and processes could be put in place for the sake of everybody involved. Processes that are going on for people on administrative leave are obviously very difficult for all parties.”

Fianna Fáil education spokesman Thomas Byrne TD said: “The department has an obligation to make these periods of leave as short as possible and conduct the investigations as expeditiously as possible.”