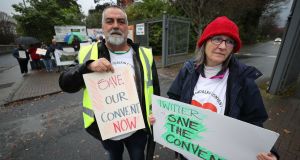 Supporters of the Save Clondalkin Convent Campaign demonstrate against plans to develop the Presentation Convent. Photograph: Nick Bradshaw

A primary school is set to lose its only playground under plans by the Presentation Order nuns and a Richard Barrett-led property group to develop a 160-year-old convent and surrounding lands in Clondalkin, Dublin.

Protesters from the “Save Clondalkin Convent Campaign” gathered on Thursday to call for a halt to plans to build a four-storey nursing home on the historic site.

The plans, which are under appeal with An Bord Pleanála, have attracted more than 70 objections from local schools, residents and historical organisations.

Scoil Mhuire, a 400-pupil primary school, says it will lose its only green space at a time when there is an emphasis on promoting exercise among young people.

Monica McGill, a spokeswoman for the campaign, said the Presentation Order had told the group it could not comment until after the An Bord Pleanála ruling.

“There is a sense of betrayal at this development,” she said. “The nuns and the convent have always been at the heart of the community. There have been fundraising drives and local involvement in the convent and church. They were happy to accept our help . . . but we now feel we’re being ignored.”

A spokeswoman for the Presentation Order said there was no one available for comment on the matter.

Bartra Property Ltd submitted plans for a 155-bed nursing home and a smaller 14-bed retirement unit for the nuns on the grounds of the convent last September. Details of any financial arrangements between Bartra and the Presentation Order have not been disclosed.

However, planning files show the order has consented to its lands being used for the planning application and that the ownership of the lands would pass to Bartra.

A number of other schools which border the proposed development have objected on the grounds of health and safety risks for children due to the volume of construction traffic.

In its planning objection, Scoil Mhuire argues that as well as losing a play area, the proposed four-storey building would block natural light for classrooms, in particular those for children with special educational needs.

In addition, it says the route the school uses to the church for religious ceremonies, via the convent grounds, has been a right of way since the school was established in the 1950s.

Clondalkin History Society says in its objection that the convent and church complex is the only example of Gothic revival-style architecture in the area and are surrounded by boundary walls made from local limestone.

“The church and convent complex is the only remaining unmolested site in Clondalkin,” it states.

The Clondalkin Round Tower Heritage Group says the development would undermine local efforts to preserve the historic heart of the village.

“The community has worked hard to help promote Clondalkin as a heritage destination both for the benefit of the local people and as a tourist destination.”