Parents unable to choose language of instruction in schools, says Educate Together 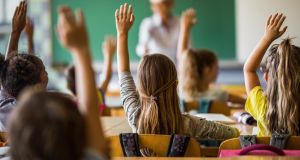 Educate Together said it will not not apply to become a patron for two of the new schools to be established next year – Donabate and Saggart. File photograph: Getty

Parents’ choice of schools is being curtailed by the Minister for Education’s decision to designate new primary schools as Gaelscoileanna, the country’s largest multidenominational patron body has claimed .

Five new primary schools to be established in the Dublin area between 2020 and 2022 are to be automatically designated for Irish-medium education.

However, Educate Together said on Wednesday that it will not not apply to become a patron for two of the new schools to be established next year – Donabate and Saggart – on the basis that it will provide less choice for parents.

“Despite the department’s claim that ‘parental preferences are central to the patronage process’, both of these schools have been pre-designated as Irish medium schools”, it said.

“This pre-designation provides less choice for parents in these areas as they will now no longer have the option to choose the language of instruction for their school. In effect, parental choice in this matter has been curtailed in Donabate and Newcastle-Rathcoole-Saggart.”

The patron body said the move risks “disenfranchising the lawful preference of a significant number of families” and is seeking a meeting with Minister for Education Joe McHugh.

Mr McHugh, however, said earlier this year that he took the decision following an analysis of the availability of Gaelscoileanna in several greater Dublin areas.

“This is a significant step in terms of increasing Irish-medium education and all the benefits it brings,” he said, last September.

“ It will be a huge boost for a large number of parents in these areas who will now have more certainty about the availability of Irish-medium education for their children.”

He said at the time that there was an imbalance in the availability of Irish-medium education.

On foot of this, he changed the criteria as part of patronage processes to allow more schools to be designated as Gaelscoileanna.

Mr McHugh said this would provide more choice for parents and children and it will give them better certainty about the availability of Irish-medium education for their children.

Educate Together added that, despite its objections, it may in future seek the patronage of Irish-medium schools or work with existing partners to deliver education through Irish.