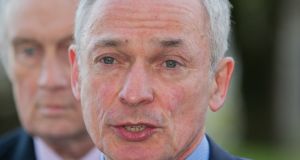 Minister for Education Richard Bruton is due to bring an Amendment to school admissions legislation to Cabinet on Tuesday. Photograph: Gareth Chaney/Collins

The Government is bracing itself for potential legal challenges for plans to remove the “baptism barrier” in school entry which are due to be published this week.

Minister for Education Richard Bruton is due to bring an amendment to school admissions legislation to Cabinet on Tuesday which will prohibit Catholic primary schools from giving enrolment priority to baptised children in cases where they are over-subscribed.

However, minority faiths, such as the Church of Ireland, would be allowed to prioritise members of their religion in order to protect their ethos in cases where they are over-subscribed.

While Mr Bruton announced the plans last year, the planned amendment has been subject to extensive legal advice from the Attorney General’s office.

The Irish Times reported earlier this year that Catholic bishops, trustee bodies for thousands of Catholic schools, along with management bodies and missionary groups, were preparing to fight the changes.

The Association of Trustees of Catholic Schools has warned the plans appear to be part of a process of “encroachment on parental rights, property rights and the capacity of faith schools to provide a faith-based education for those who opt for same”.

The Catholic Schools Partnership, which represents the Catholic bishops in the education sector, argued forcing schools to change their admissions policies without increasing the number of places would result only in “different families and their children being disappointed”.

The Department of Education has declined to comment on the wording of the amendments.

However, Mr Bruton has been on record as stating that it is “unfair that preference is given by publicly funded religious schools to children of their own religion who might live some distance away, ahead of children of a different religion or of no religion who live close to the school”.

Given the backlog of legislation before the Oireachtas, political sources say it is unlikely the school admissions legislation will be enacted ahead of the summer recess.

Once enacted, it is likely that Catholic primary schools will be given a lead-in time to change their admission policies.

– A phasing out of waiting lists for the enrolment of children within a five-year period. Instead, parents will be required enrol their child in schools during a three-week window in the year prior to enrolment:

– A 25 per cent limit on the number of places that schools can set aside for children of past pupils; at present there is no limit;

– A requirement that all schools publish details of their arrangements for children who opt out of religious instruction classes, and

– New powers to ensure a child with special needs can access a school place that is designated by the National Council for Special Education.

Attempts by the previous government to put in place similar changes were never legislated for and faced resistance from some private schools.

Many private secondary schools, for example, have the names of young children on waiting lists for admission for a decade or more.

Past pupils organisations linked to both Blackrock College and Belvedere College, two fee-paying schools for boys in Dublin, have lobbied against some of the changes, in particular the “old school tie” provision which limits the number of places set aside for children of past pupils.