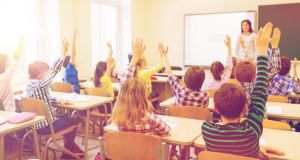 Some primary schools which are struggling to cope with teacher shortages admit to using special needs support teachers to fill in for regular class teachers. File photograph: iStockPhoto

Pupils with special needs are among the most vulnerable of children in the education system.

They require the support of resource teachers and, in some cases, special needs assistants to help reach their full potential.

But many primary schools which say they are struggling to cope with teacher shortages admit to redeploying support teachers in order to fill in for absent mainstream class teachers.

This, say education experts, is depriving children with special needs of vital supports and disrupting their education, which hinges on carefully planned routines.

A survey published by the Irish Primary Principals’ Network indicates that almost 40 per cent of schools failed to find a substitute on more than 10 occasions in the previous year.

The use of support teachers to take over mainstream classes was cited as one of the most common actions taken by principals.

This is despite the fact that the practice is in direct violation of policies set out by the Department of Education.

Principals, however, say they are left with no choice and need to keep classrooms functioning.

And parents, for the most part, are kept in the dark because schools are reluctant to highlight these failings, according to staff who spoke to The Irish Times.

An acute shortage of substitute teachers at primary level has been well-documented over recent months.

Schools report major problems finding teachers to fill in for short-tern absences, which is leading to split classes or the use of unqualified teachers. The impact on children with special needs has received relatively little attention so far.

“On any given day, a principal has to make a choice: what causes the least amount of disruption?” asked the school principal of a small rural school, who declined to be named.

“We have only one learning support teacher. Now my option for running the school during a staff absence is dividing a class of 27 into other classrooms; nine other students entering a full classroom is not physically possible. Or I can reassign a teacher to cover.

“It’s not something you communicate with parents – the teacher shortages aren’t noticeable. In any other profession, be it a dentist or doctor’s appointment, if they cancel, you’re informed and it doesn’t go ahead.

“But in schools, principals are trying to keep the school running. Keep the system going. What’s the other option? Tell 27 children and parents that school isn’t open today for them?

“And I believe our role goes further than any circular. In the Education Act, principals are said to be responsible for ‘the day-to-day management of the school, including guidance and direction of the teachers and other staff of the school’.

“To say principals should not act in this fashion is impossible, as we are the ones managing the school.”

The practice of redeploying support teachers in this fashion is at odds with circulars issued by the department to schools.

A spokeswoman for the department said there are strict rules “to prevent the misuse of special education resources”.

“Additional teaching resources cannot be used for mainstream class teaching, or to reduce the pupil-teacher ratio in mainstream classes, or to provide additional subjects for pupils who do not have special educational needs,” it states.

A number of recent inspection reports conducted by the department, however, confirm this is happening.

A department spokeswoman said: “If schools are not using their resources in the manner intended, this matter will be brought to the attention of the school and the school will be requested to immediately cease such practice.”

She added that where there is misuse of these teaching resources, the department reserves the right to review allocations made to those schools.

The National Council for Special Education, which allocates special education teachers to schools, said its position is that these teachers are additional supports and “principals have a responsibility to ensure that they are targeted at those students with the greatest levels of need”.

The dilemma of sticking by vulnerable pupils with special needs or teaching the wider class can be wrenching for some teaching staff.

One teacher spoke of feeling guilty over being asked to leave their own class.

So you have sick teachers working through, and becoming more and more ill, eventually having to take longer off

“It’s not a decision any school takes lightly, but it’s just total chaos,” the teacher said.

“We’ve had two teachers absent this week and there has been no learning support. The guilt and stress when you’re not seeing your groups for support is immense. Kids who need that one-to-one attention. And it’s the same kids that are getting affected by this.

“And for the other class teachers, they are now dealing with children who can’t access material individually in an overcrowded situation.

“When our school has absences and there are no subs, we have to use learning support because sometimes we don’t have the furniture or space to even split classes across the school.

The teacher says some staff are “petrified of becoming ill” because of the impact on the wider school.

“You see teachers work through sickness so as not to cause these kinds of decisions having to be made. So you have sick teachers working through, and becoming more and more ill, eventually having to take longer off.

“Again, it’s back to that feeling of guilt all schools are suffering through just to stay open.”

Teachers’ unions understand the difficult position many principals and teachers find themselves in.

“Schools are dealing with the current substitute shortage in a variety of ways,” says John Boyle, former president of the Irish National Teachers’ Organisation

“Schools also try getting a student teacher to cover, splitting classes among other mainstream classes, asking a special education teacher to cover and when all else fails asking an unqualified person to cover to ensure the safety of the pupils,” he says.

“While it is not the default position of a school to ask a special needs teacher to cover absent colleagues,” Boyle says, “principal teachers will go to many lengths to try and get qualified teachers for cover.”

The department points out that it is recruiting more new teachers than at any other point in the history of the state, with more than 5,000 additional teachers recruited in the last two years.

However, it says a specialist group is considering the issues that are impacting on teacher supply and demand and is overseeing a programme of actions to tackle them.

They include boosting the number of teacher training places, restricting career breaks and attracting retired teachers back into the classroom.

The INTO maintains that these measures do not go far enough and says issues such as two-tier pay, supply panels and other measures are needed to make any decisive impact.

A failure to get to grips with the situation risks compromising the primary education of all pupils, including those with special needs, the union says.

“Where people with no qualifications are engaged all pupils can lose out but this can have a greater impact on children with special needs.”

“It is the INTO’s view that it is not possible to aim to have the best education service by 2026 while there is no capacity in the system to cover teacher absences which are among the lowest in the public service.”

“This current shortage was predictable given the worldwide teacher shortage. It can be rescued through supply panels and completing pay equalisation” Boyle concludes