Can Gaeltacht schools be saved from extinction? 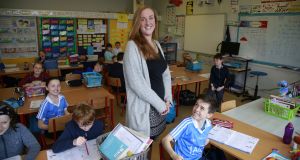 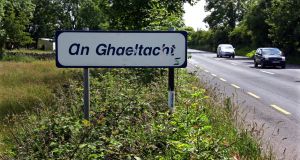 The Gaeltacht is facing a ‘linguistic crisis’, according to Bláthnaid Ní Ghréacháin, chief executive of Gaeloideachas. Photograph: Joe O’Shaughnessy

Is the Gaeltacht facing extinction? The number of native speakers has been in decline for years, and a stark 2014 report warned that early exposure to English is damaging the standard of Irish among the Gaeltacht’s children. Some believe this could be the last generation of native Irish speakers.

Outside the Gaeltacht, however, Irish-medium Gaelscoileanna are thriving and don’t have enough places to meet demand.

So, why is the language doing better outside its last remaining stronghold? And is there any way back for the Gaeltacht?

“The numbers speaking Irish as a living, everyday language are in decline,” says Bláthnaid Ní Ghréacháin, chief executive of Gaeloideachas, a voluntary organisation that supports the development of Irish-medium schools.

“There’s a perception that everyone who lives in the Gaeltacht is an Irish speaker but, in reality, there is a linguistic crisis.”

One of the challenges for the Irish language is that English dominates in interactions outside the classroom.

“It takes a lot of leadership from school management, board and parents to encourage Irish to be spoken in the yard, in the classroom and outside the classroom. So many resources are in English and social media is in English too.

“We also need to make sure that there are avenues for children to use the language when socialising and playing sports. We have a tendency to see schools as the saviour of the language but there have to be other supports and infrastructure.”

Within the Gaeltacht, some schools in which Irish was nominally the language of instruction had been drifting, almost by default, towards English.

“If you live in the Gaeltacht and wanted your child taught through English, you have to seek out an English-medium school, whereas outside the Gaeltacht, it is an active, conscious decision to have your child educated as Gaeilge,” says Ní Ghréacháin.

“In every school there are learners, speakers and people with different degrees of Irish, so teachers found it hard to do immersion education.”

A new policy has been introduced whereby Irish-medium schools in the Gaeltacht apply to get recognition and special supports.

It came 12 years after a report in 2004 which found that almost half of children attending Gaeltacht schools did not have any better competency in Irish than the majority English-speaking population.

Under this new system, primary schools seeking recognition as Gaeltacht schools will have to teach solely through Irish for junior and senior infants. Advocates for the language believe it could be a game-changer.

“These are the two years where sanctuary is provided for Irish, and it’s proven internationally as the most effective model of bilingual education,” says Ní Ghréacháin.

“But a big challenge is that the majority of Gaeltacht schools may only have two or three teachers, so one teacher may be delivering four different classes.

“How can they implement an immersion policy if the infant classes are hearing English when the teacher talks to the first and second class beside them?

“The policies to address this will be crucial; we know that schools will be granted some extra teaching hours but we wait to see the detail. Ideally, we would have a greater pupil-teacher ratio.

“One strategy used by some schools is to wait until the junior and senior infant classes have gone home at 1.30pm and then teach the older classes English in the remaining time.”

Anna Ní Chartúir is president of Gaeloideachas, which represents the Irish-medium and Gaeltacht education sector, and she is also a teacher at Scoil Sailearna in Indreabhán.

Prior to this , she was the principal of a two-teacher school which closed due to dwindling numbers.

“There are clear benefits to exposing the children to Irish for two years: they will have better competence and understanding of the entire curriculum,” she says.

“We also know that bilingually competent children are much better at picking at a third language.”

The Department of Education says uptake among schools for the new recognition scheme has been very strong, with the vast majority opting into the scheme.

It says dedicated funding has been doubled from €1 million to €2 million, along with additional language support hours which are equivalent to providing an extra 40 whole-time teachers.

The new policy alone won’t save the language, however.

Ní Chartúir points to a shortage of teachers, particularly at post-primary level, who can deliver the curriculum through Irish.

“The Leaving Cert syllabus for Irish in Gaeltacht schools needs to be revised as a matter of urgency, and there will need to be continued, targeted supports given to Gaeltacht schools including additional teaching hours, continuous professional development and, critically, teaching resources in the Irish language.

Many of Ní Chartúir’s suggestions aren’t particularly expensive: one option is simply to expand the number of teachers trained through Irish; currently, NUI Galway’s master’s in education through Irish is oversubscribed. People want to teach through Irish, and yet schools struggle to get them.

“We saw recently that Gaelscoileanna (Irish-speaking schools outside the Gaeltacht) may prioritise children from Irish-speaking families in their enrolment policies,” says Ní Ghréacháin.

“This is because there is demand. People appreciate the language, even passively. People want to keep it alive, and parents are really engaged.”

However, getting a Gaelscoil off the ground is a challenge, as the Department of Education decides on patronage based on what the majority in the area want, meaning that new Irish-speaking schools will often be in the minority.

“A competitive tender process is not supportive of Irish medium education” says Ní Ghréacháin. “The department needs to recognise this.”

A problem for the Irish-medium education is the perception that children with special needs are not welcomed, or that they won’t be able to cope.

“My specialist area is children who are on the autism spectrum in Irish-medium schools,” she says.

“We have two thriving autism spectrum disorder (ASD) classes as well as children with speech and language difficulties, vision issues, dyslexia, dyscalculia and more. We identify the child’s needs before they start school and intervene early.

“National and international studies show that these children do as well in bilingual education settings; indeed, being bilingual can help them with divergent thinking and may be especially good for children with autism. This can be the best option for many children.”

While there are concerns among some that all-Irish education can hold some students back, native speakers such as Mairéad Ní Chuaig, who presents a travel show on TG4, says bi-lingualism actually improve academic performance.

“I went on to learn Italian in college. There are huge benefits to being bilingual; once you have two languages, learning a third is easier. I think I pick up words faster and it has helped me learn phrases in other languages.”