Quality of third-level courses ‘at risk’ due to funding shortages 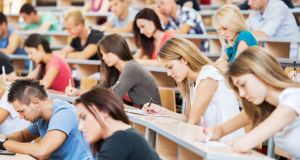 The Higher Education Authority has warned that the quality of third level courses is at risk due to a deterioration in staff-student ratios in colleges. Photograph: iStock

The Higher Education Authority has warned that the quality of third-level courses is at risk due to a deterioration in staff-student ratios in colleges.

Its comments come in the same week it emerged that dozens of third-level students at NUI Galway were refunded fees for a course on foot of quality concerns.

A spokesman for the authority said staff-student ratios have climbed from about 1:16 to 1:20 over the past decade, significantly above the average for developed countries.

This is due to rising student numbers and restrictions on hiring new staff, known as the employment control framework.

A projected growth of up to 25 per cent in student numbers over the coming decade is likely to pose major challenges for the sector.

“The increase in the number of students in higher education is putting institutions under pressure,” he said. “There’s no doubt that staff-student ratios have got worse and that has an impact on student-contact hours.

“There is a demographic tsunami coming and if we allow the staff-student ratio to get worse, the quality of programmes will be at risk.”

The authority’s comments echo the conclusions of an expert group which compiled a landmark report into the future funding of higher education in 2016.

“This is impacting on teachers’ abilities to identify and support at-risk students,” the Cassells report found.

Earlier this week it emerged dozens of journalism students at NUI Galway received refunds worth thousands of euro over several years on foot of complaints over the quality of the course.

The university’s complaints board upheld complaints and found they stemmed from issues such as difficulties replacing staff on sick leave and a poor standard of specialist equipment.

The university said in a statement that it suspended the postgraduate course last year and it will be relaunched in September.

“The ambitions of the relaunched programme are to produce graduates with up-to-date skills and specialisations suited to the contemporary world of journalism,” the university said.

“Following the review, NUI Galway has appointed a senior academic to lead the development of its journalism, media and communications programmes in the coming years.”

In a statement, the Department of Education said there was a “detailed and comprehensive legal framework” in place to underpin the quality of education at third level.

Universities have primary responsibility for reviewing and improving their own quality.

In addition, the State’s watchdog for education qualification standards, Quality and Qualifications Ireland (QQI), also conducts conducts regular institutional reviews. In 2016, the QQI commissioned a report on education quality at third level which found that spending cuts had pushed some third-level college courses to “crisis point”.

The report highlighted issues such as the cumulative effects of reduced funding, lower staff numbers, increased teaching burdens, the casualisation of staffing and promotion limitations.

“The negative impact of limited funding available to maintain, enhance and develop the learning environment through facilities and equipment was also evident.

“What is striking is the general impression from some reports that some units have reached a ‘crisis point’ where continued cuts/reductions may have serious and irretrievable implications for their future sustainability.”