Pisa rankings: Irish teens among the best at reading in developed world

15-year-olds above average in maths and science, but low number of high achievers 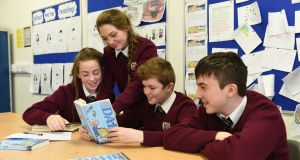 Teenagers in Ireland are among the top performers in the world in reading literacy, according to latest international standardised test scores.

Irish 15-year-olds also perform above average in science and maths, according to the Pisa (Programme for International Student Assessment) test results which were conducted last year.

However, students in developed parts of China as well as Singapore are streaking ahead of the world and outperforming all other countries in reading, maths and science.

Overall, teenagers in Ireland score highest for reading (8th out of 77 participating countries) and above average for maths (21st) and science (22nd).

There are concerns, however, that Ireland has significantly fewer high-achieving students in maths and science compared to other developed countries.

This slow and incremental decline has been notable since 2012 and raises questions over whether our most talented students are being challenged enough.

On a positive note, Ireland has a very low proportion of low-achieving pupils compared to other countries.

This is likely to be result of a big focus on tackling literacy and numeracy in recent years, as well as investment in disadvantaged schools.

The variation in performance between schools in Ireland is also lower than many other countries – a sign that Irish secondary schools are relatively equitable compared to other developed countries.

In Ireland, the difference between schools in student performance in reading literacy is less than half of what it is, on average, across OECD countries.

When broken down by gender, the results show girls in Ireland significantly outperform boys in reading. However, there is no significant gender difference for science and maths.

Minister for Education Joe McHugh welcomed the results and said Ireland is in an “envious position” when it comes to reading performance, in particular.

While he said our performance in maths and science is relatively stable, he said we can improve further.

“I am confident that the changes which the Junior Cycle is bringing will help the development of our students’ critical thinking. It is no longer just about the facts and knowledge that we teach our young people but helping them see how they can put that into use,” he said.

The extent to which students in parts of China are outperforming the rest of the world has surprised many.

The figures show 15-year-olds in the four provinces of China that participated in the study – Beijing, Shanghai, Jiangsu and Zhejiang – outperformed by a large margin their peers from all of the other 78 participating education systems in maths and science.

In fact, the most disadvantaged 10 per cent of students in these four jurisdictions showed better reading skills than those of the average student in OECD countries.

However, analysts point out that these areas are highly developed areas and are likely not reflective of the country as a whole.

The Pisa results also examine use of technology among students and show students in Ireland are less likely than pupils in other developed countries to use digital devices for classwork in school or at home.

Students reported that it was mainly the teacher who used digital devices in the classroom.

Principals’ views on the capacity of their schools to enhance teaching and learning through technology are also less favourable than in other developed countries.

While they reported having access to devices and broadband, concerns focused on a lack of sufficient access to technical support or assistance, availability of professional resources teachers’ skill levels.

It also shows that students who spend longer online – such as playing games or on social networking sites – on normal school days are more likely to have lower reading achievement levels.

Data on student wellbeing has some worrying results, with students in Ireland less likely than those in other developed countries to report being satisfied with their lives.

Significantly fewer girls reported being satisfied with their life compared to boys in Ireland.

Stress is also a factor, with a number of students in Ireland (23 per cent) reporting that they always feel under pressure from teachers to do well in exams.

In addition, 11 per cent of students report feeling physically unwell thinking about or doing exams. These pupils perform less well, on average, in reading literacy.