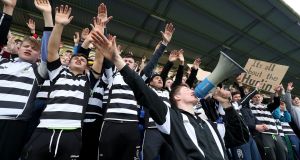 Cistercian College pupils at the Leinster Schools Senior Cup quarter-final in Donnybrook, Dublin, a couple of days before the school’s closure was announced. Photograph: Dan Sheridan/Inpho

Parents opposed to the closure of Cistercian College in Roscrea are holding a meeting on Wednesday night to debate how the famous boarding school could be kept open. “Heartbreak” was the reaction among current students at the college, according to the parents’ association, when the news broke on Friday that the Cistercian order had decided to close the school because of falling student numbers. There are currently 167 pupils, down 45 per cent on 10 years ago, according to the school which is located at Mount St Joseph Abbey in Co Offaly.

Past pupils were also upset about the move, association chairwoman Sinéad Lawlor said, and a Facebook page has already been set up, Save CCR, by people concerned by the decision and its implications.

Ms Lawlor said relations and communications between the Cistercians, including the abbot of Mount St Joseph Richard Purcell, have always been good but, in this instance, there has been “an unfortunate gap in that communication”. Many parents did not find out about the decision until they went to collect their boys on Friday, she said.

Her own son Cillian (14), who is in second year, was “inconsolable” and pupils in general were “very hurt, very sad, and that’s an understatement,” she said. “CCR is another family for them. The teachers and support staff are all family to them and treated them as their own kids. The boys are like brothers to each other. It’s very, very understandable that this comes as a massive shock.”

Ms Lawlor said because the college, at Mount St Joseph Abbey in Co Offaly, was “a superb school, loved by pupils past and present, it is one of the reasons why I refuse to take this lying down, as do many parents”.

The parent body met the school’s co-managers in December. They took over the running of the institution last November when the outgoing board of management reached the end of its term. They were aware that a decline in student numbers was an issue, she said, and that the co-managers were looking at the viability of the school.

“The co-managers gave us a number of options. They said there were a number of areas they were investigating,” Ms Lawlor added.

“Our understanding from that was that these options included everything from increasing the intake of foreign students, to looking at co-ed [admitting girls], five-day boarding. We expected feasibility studies to be done on those, and trial periods . . . A number of schools have had to go down that route. We’re in an era of change and the old-fashioned approach to schooling is not the approach that’s viable nowadays. We expected that these ideas would be looked at in detail and we would be party to those decisions, but unfortunately we weren’t.”

The reaction since the announcement meant there was not just sadness about the decision but “a massive pool of expertise and interest in both the parent body and the past pupils” to explore possibilities. That will be the focus of tomorrow night’s public meeting in the County Arms in Birr. “I think if the options were put out there to the wider community of Roscrea,” Ms Lawlor said, “that there’s more than enough interest in the area to open as a day school or a co-ed school.”

Abbot Purcell said in a statement on Friday that the school had seen a 45 per cent drop in enrolment in the last 10 years, with just nine first years enrolled for next September. “Clearly this is unsustainable and the school is simply no longer financially viable. We were sadly left with no option but to conduct what we anticipate will be a phased closure of the school over the next 16 months.”

He also said that options such as five-day boarding, co-education, day students and taking more international students had also been considered but “none of these were considered feasible given the college’s geographic location and its current operating model”.

The school may stay open next year to cater for current second and fifth years as they complete their exam cycles, depending on demand.