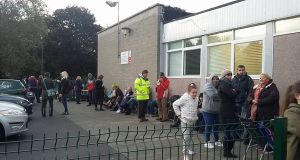 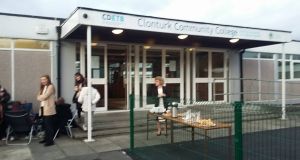 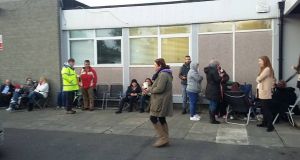 A new secondary school in Dublin filled all of next year’s school places within hours on Monday morning after parents queued overnight to guarantee access for their children.

About 100 people – some with deck chairs and barbecues – gathered outside Clonturk Community College from Sunday afternoon onwards .

The Whitehall-based school is running a first-come-first-served admissions policy for next year’s intake of first-year students,

The secondary school, which opened its doors for the first time last month, is operated jointly by Educate Together and the City of Dublin Education and Training Board.

Principal Susan Campbell said she was shocked at the surge in demand given the school did not fill its available places last year.

“We didn’t realise this would happen. Last year, only 47 students applied. Today, there was more than twice the number queuing outside.

“We got a sense of how interested people were last week when hundreds of parents turned up to our open evening. But I am shocked at the numbers here today.”

She said she felt sorry that parents had to queue overnight and pledged to review the school’s’s admissions process in light of the demand.

“I don’t want parents to feel they have to camp outside to get a school place. It’s not fair. We’re delighted they want to come here, but this isn’t what we want . . . I’m just glad the atmosphere was so good-humoured. There was a camper van, some parents had a cookout . . . they were in great spirits.”

While there are at least four boys’ and girls’ secondary schools in the area, Clonturk Community College is one of the few mixed schools in the wider region with an Educate Together ethos.

“I think there is a big shift in the type of school that parents want for their children,” she said.

“They are longing for a culture of positivity and mutual respect. That’s the culture we are focusing on, as well as excellence in teaching and learning.”

While the school teaches students about religion and ethics, it does not offer traditional faith formation classes.

Jan McCarthy is one of the parents who stayed overnight to get her child a place.

“We were checking with the school on and off on Friday and Saturday,” she told Newstalk radio.

“I had to come up Sunday twice and on my third time up, there was someone else in the queue. It was a no-brainer. I was out of the car, the chair was down and I was here for the night.”

“My son is in an Educate Together primary school, but there is no admission policy here – it’s first-come-first-served.”

Ms Campbell said the school had filled the 96 places it allocated for next year, but said parents can continue to submit their applications given that some may have made multiple applications for schools.

She said the school’s board of management will seek talks with the Department of Education over providing additional places in light of the sharp increase in demand.

The school, which is co-located with Plunket College of Further Education, is projected to have a capacity of about 260 students.