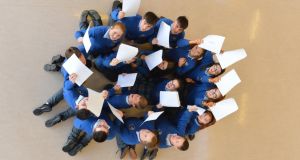 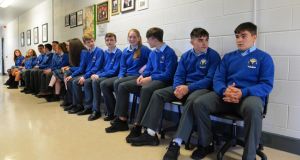 The 16 boys and girls filed into Coláiste Íde agus Iosef, in Abbeyfeale, at about 10.30am. Among them were 15-year-old brothers David and Jack O’Connor, from Athea, who were thrilled with their exam results.

They say that being twins has helped them keep each other motivated. “If I’m stuck on a sum in maths Jack can help me, and vice versa,” said David. “It’s good having him around,” added Jack.

David would like to become a carpenter, “as I’m handy with the hands”; Jack will keep studying so he can become a primary-school teacher.

The sisters, who are preparing for transition year, said studying was tough but agreed that “if you keep studying the results will come”.

Christopher and Chloe Lane, who live just over the county border, in Kerry, said they were excited to be moving on to the next stage of school, having got the results they wanted.

“I did good, in fairness. It was hard work, but it paid in the end,” said Christopher. “I was studying since straight after Christmas. I’m hoping to do mechanical engineering. I was nervous earlier, but it’s all okay now.

“Chloe did very well as well. She did better than me, to be honest. There’s always a bit of rivalry between us.”

Chloe, who hopes to be a veterinary nurse, was beaming after receiving an A in maths.

It was a proud day for their dad, Pat, who waited for them outside school. Wiping away tears, he said: “I’m very happy and delighted with them. They worked hard, the both of them, and it’s a brilliant achievement.”

Before heading back to their family farm, in Brosna, he had some sound advice. “I’ve been telling them to get into the studying, and to stay off the farm, ease off the sports a bit and work on the books for now – because you won’t be at it every day, but while you are at it make the best of it.”

The school’s principal, Liam Murphy, said: “It certainly is a unique, very special day for the school: 16 students, eight sets of twins . . . We’re delighted for them.”

He had praise for all the pupils who received their results today. “They’re great students, each of the 129 of them, and it’ll be good to see them progress to the next stage of their secondary-school education.”

He reminded all 701 students at Coláiste Íde agus Iosef that school isn’t just about exams and results. “For all of us – including myself, in my own time at school – it wasn’t all about getting all As . . . We just want to see all the students achieve the best of their ability and hit their own goals. For us, if they can do that, we’ll be happy for them.”