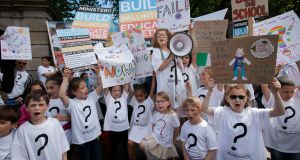 Educate Together Schoolchildren during a protest at Leinster House, Dublin in May over the building of a school in the Ballinteer area. Photograph: Gareth Chaney Collins

Some parents of children from the Ballinteer Educate Together school have said they changed arrangements for work and childcare following the school’s move to a new temporary location in Churchtown in Dublin.

The primary school’s parents are calling on the Minister for Education to address the delays in the construction of a new school building after five years in temporary accommodation.

Some 280 children from the Ballinteer Educate Together school began the 2017 academic year in new surroundings this September when they moved from their temporary classrooms in prefab units at St Tiernan’s secondary school to the grounds of the Notre Dame school in Churchtown some 3km away.

The Educate Together school opened in 2012 but has been waiting for five years for a permanent home due to planning difficulties. The school is expected to spend the next two years on the Notre Dame premises as it awaits planning permission for the new building.

However, the change of location has forced some parents to change childcare and work arrangements while certain families have decided to leave the school, according to spokeswoman for the group, Laragh Havelin.

“The new space they’ve given us is a vast improvement on what we had in the St Tiernan’s premises. The classrooms are a lot bigger and the children have access to a hall. But it’s not our school in the long term.

“The children are a bit confused because the classes are split into two different parts of the building with two separate entrances. They know it’s a better situation but it is unsettling.

“For a lot of parents the move to Notre Dame just wasn’t feasible for them with work and transport so we’ve lost children from the school. Some people have had to change jobs and look for new after-school childcare options. It’s really displaced a lot of parents in terms of their day-to-day functioning.

“We aren’t complaining about what we have at the moment, it’s vastly better, but we want updates on the new school and to be treated like human beings.”

Friday marked 100 days since parents and children from the school marched to the Dáil and protested outside Leinster house to highlight the delays in building the new school.

“The teachers have done their best to make their new classrooms in Notre Dame as bright and comfortable as possible for the children but then cannot make any long term plans for resource rooms or PE facilities,” said Ms Havelin. “It’s difficult to organise when we don’t know how long we’ll be in this situation.”

A spokesman for the Minister for Education described the construction of the new school as “a complex planning issue” and said the Department had met with “all relevant parties including the local authority and third-party landowners” with a view to finding an acceptable solution to access issues at the site.

“All aspects are being progressed in close liaison with the local authority and it is imperative, that all of this work is done to the satisfaction of the local authority in order to ensure that a third planning application is successful,” he said. “The Department is fully committed to bringing this project to a satisfactory conclusion as soon as the planning issues have been resolved.”